Children love these stories for the same reasons we do. There is something so touching - and off-the-charts cute! - about these friendships between animals who should, by nature, be afraid of each other, or even in a very different kind of relationship - at mealtime.

For kids, some of these books have a moral overlay, teaching about difference and tolerance. That's fine, as long as its done with a light touch. Children's books don't need to be didactic to get their message across.

I've seen at least a dozen animal-friendship books, and there are probably a dozen more I haven't seen. I've chosen four good ones, and highlighted two others that are noteworthy for the wrong reasons. Don't miss the bonus tracks at the end. (Anachronism alert! You might have to be over a certain age to know what a bonus track is.) 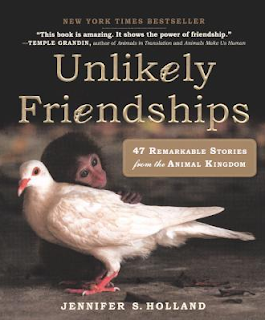 Jennifer Holland's Unlikely Friendships is noteworthy for the outstanding photography and perfectly concise text. A writer for National Geographic magazine, Holland avoids sentimental or cutesy language, focusing on animal behavioural explanations for how such unusual bonds may form.

Holland includes some of the more famous interspecies friendships, like Owen and Mzee (see below), and some that are total cute overload, like a horse and a fawn. But surely the most remarkable friendship stories are those between animals who normally interact as predator and prey. A leopard returns to an Indian village every night to sleep with its friend... a calf. A female lion raises a baby oryx. There is a friendship between a snake and a hamster!

This book is marketed to all ages. Although an adult could read it to a young child, and the child would undoubtedly enjoy the photos, the language and the subject matter is more appropriate to older children with strong reading skills. The very young child would not understand why these friendships are so unusual, or, for example, why a snake who eats a hamster rather than befriending it isn't mean or bad.

Holland also adapted her book for children. Unlikely Animal Friendships for Kids is a series of chapter books, each with five animal-friendship stories, retold in simplified language. Unfortunately, they read like dumbed-down versions of the original, or something that was hastily thrown together. I'd avoid them. 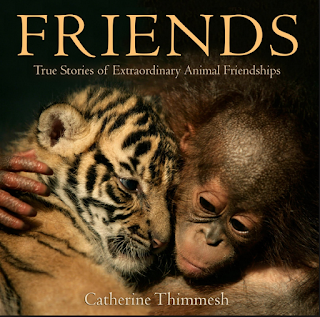 Catherine Thimmesh's book, on the other hand, is a children's book written by someone who knows how to write for children. Each animal friendship is told in a short story written in simple rhyming verse. Although the photographs are not as striking as the ones in Holland's book, they are still beautiful and engaging.

The author's website has a promotional video where you can see some of the animal pairs. Who can resist a sad-eyed monkey cuddling with a white dove? Children of almost any age would enjoy this book. 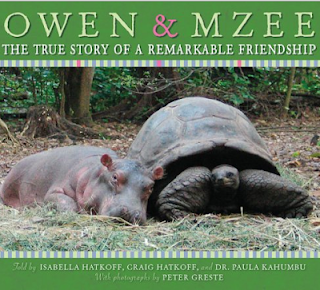 These days, the most famous interspecies love stories have their own books, or series of books, or maybe a mini-franchise. Owen and Mzee was one of the first. It tells the story of a baby hippo who was orphaned during the 2004 tsunami, and rescued by an animal rehab centre in Kenya. Rescuing a 600 pound baby is no small feat, and that story is well worth telling. But those animal workers were amazed when a giant tortoise, thought to be around 130 years old, adopted the hippo. The two became fast friends, spending all their time together, including swimming and playing together.

This story is not only happy and sweet. The baby hippo is separated from its pod (a hippo family), the fate of the mother is unknonw, and the baby is lost and alone. The choice of photographs by Greste, a photojournalist for BBC, helps prevent the sad part of the story from becoming overwhelming. Ultimately, of course, this is a story of love triumphing over pain, and friendship helping to heal loss.

Craig Hatkoff has written several lovely children's book about animals, including Knut: How One Little Polar Bear Captured the World (website here) and Leo the Snow Leopard: The True Story of an Amazing Rescue. Owen and Mzee is not only about animal friendship; it's full of well written information about hippos, animal sanctuaries, tsunamis, and more.

Isabella Hatkoff, listed as co-author or contributor, is Hatkoff's daughter. When she was six years old, Isabella saw photos of the friendship between the hippo and the tortoise, and persuaded her father to write this book.

Another book, A Mama for Owen, treats the same story in picture-book format, without success. Author Marion Dane Bauer over-simplifies the story, portraying the baby hippo as meeting the tortoise by accident. Although I often argue in favour of introducing children to difficult concepts, I'd approach this book with great caution. Should very young children see a baby separated from its mother, who gets swept away in a huge ocean wave? The baby hippo finds a new friend, but friends are not mothers. This book isn't particularly well done, but more importantly, it could be extremely upsetting, even traumatizing. 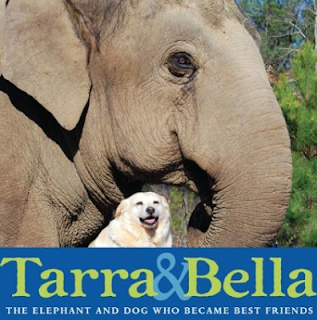 This post wouldn't be complete without Tarra and Bella. You've probably seen video of this inseparable pair, who were YouTube superstars.

Tarra had been a circus elephant. When she was allowed to retire, she was put in sanctuary. Tarra avoided other elephants and didn't make friends - until the appearance of Bella, a stray dog and new sanctuary resident. It was, as the cliche goes, love at first sight. When Bella was hospitalized after a serious injury, Tarra sat outside the dog's recovery room, every day. When Bella recovered, Tarra was waiting for her, ready for them to walk together at Bella's new slow pace.

This is a beautiful story, beautifully told, with excellent photographs, including frames from video of the moment the friends were reunited after Bella's recovery. The book contains great, brief information about the Tennessee animal sanctuary where it took place, and the URL of an "EleCam" on the sanctuary grounds.

Bonus tracks! A collection of interspecies love sent by wmtc readers over the past year.

Dog and river otter at play!
Animal odd couple photo gallery from the New York Daily News: here. Turns out that paper is good for something after all!

Lions and tigers and bears oh my: here.