what i'm reading: the night watchman by louise erdrich 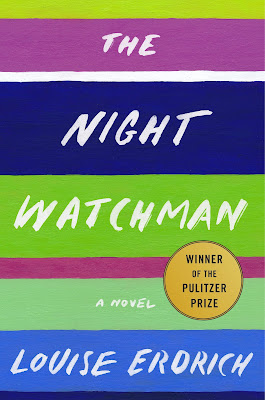 I read Louise Erdrich long ago, in the 1980s and '90s, devouring several titles, including Love Medicine, The Beet Queen, and my favourite, Tracks. Erdrich remained on my radar, but somehow I didn't pick up another of her books for decades -- until now. And I'm so glad I did.
The Night Watchman, which won the 2021 Pulitzer Prize for Fiction, is a captivating, transcendent novel, a book that does many things at the same time, and all of them achingly beautiful.
Although the story takes place in the 1950s, and was inspired by Erdrich's grandfather's papers -- and his activism on behalf of his people -- this book doesn't have the feel of historical fiction. To me it reads more like a story of personal journeys and relationships, against a backdrop of reservation life.
Thomas, who works as a night watchman, is organizing to defend his people from the federal Termination Bill, that -- quite literally -- will make his tribe disappear. Patrice, Thomas' niece, is trying to locate her sister, who has also disappeared -- into the city, whether by choice or against her will, we don't know.
The story follows both these struggles, along with pieces of the journeys of people in Thomas' and Patrice's kinship circles, seen in varying degrees. There's a lot of humour, not a little sadness, and richly drawn portrayals of iron-willed love and throat-catching intimacy. Hardships are presented matter-of-factly, without melodrama; they are just the fabric of life. The characters are vivid, the relationships are complex, and even the less likeable community members are seen through a compassionate lens.
As with most Indigenous-created fiction, there is a spiritual or mystical element, too. Erdrich skillfully weaves this into the plot and allows its meaning to remain ambiguous.
There is also the spectre of violence against women, especially missing and murdered Indigenous women. Erdrich lets us bear witness to this grim reality, in a way that is highly effective and memorable, but not graphic.
I closed this book feeling that the author had guided me through a journey. I had that feeling that is my greatest praise for any novel: I was sorry it had ended.
Posted by laura k at 11/01/2022 11:23:00 AM