planned obsolescence, future landfill, and premium-priced durability: in which we buy an expensive new washer 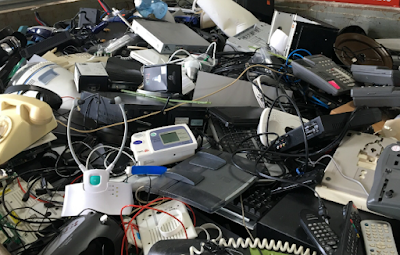 One of the things I hate most about our current world is planned obsolescence.
There's a "wmtc's greatest hits" long piece unpacking planned obsolescence, as it relates to capitalism and our deteriorating environment: "we work to buy things that are built to die so that we must work to buy more things that will break". (This post sparked an interesting long discussion, now lost to the ether.)
When we look at the cost of basic living now, compared with our parents' or grandparents' generations -- home internet, computers, mobile phones, etc. -- we need to include this. We buy and re-buy, over and over, items that our parents may have replaced once in their lifetimes, if at all.
And the life cycle of products continue to shrink. Things we bought when we first moved to Canada in 2005 lasted longer than the same items purchased in 2015. We once bought a can opener that was literally single-use. A coffee grinder that I used five times before it broke. And on and on.
Wmtc readers had another good discussion about this after I bought an extremely expensive office chair. Talk about privilege! I was embarrassed to spend almost $1,000 on a chair. The alternative, however, was spending $200-300 for a chair that would fall apart in less than two years. My expensive chair, purchased in 2009, is still like new in 2022.
This kind of buying is a privilege, only feasible for those with discretionary income or credit. Folks with less income end up buying crap because it's all they can afford -- another form of the cost of poverty.
Planned obsolescence preys on bargain hunters. The quest to wring maximum use from every dollar actually means spending more in the long run.
Planned obsolescence keeps people in debt, or in poverty, or prevents them from living a better life with greater comforts and supports.
Planned obsolescence is killing our planet. The Earth is filling up with phones, and computers, and appliances, and plastic toys, everything else that we buy, and re-buy, and re-buy.
* * * *
I think about this all the time, but most recently it's on my mind because our washing machine broke.
The Whirlpool washer that was in our home when we bought it suddenly stopped spinning. The one appliance repair person in our little town is away for an extended period of time. Through some intense sleuthing, I found a repair person in the next town, about 45 minutes away -- but he doesn't make service calls.*
We disconnected the washer, loaded it into the car, and drove to Port McNeill. The following day, Repair Person called: it can't be fixed. The part that broke isn't available, as the breakdown of this part signals the end of the machine. By tracing the serial number, he learned that the washer was manufactured seven years ago -- and that is the full lifespan of the machine.
Seven years? For a washer?? That is ludicrous.
Now we had to drive back to Port McNeill, pick up the faulty washer, and re-install it. We would use a lot of electricity drying sopping wet clothes, but at least we'd have something in the interim. Envisioning our hydro bills would be a great incentive to buy a new washer, pronto.
As I started to research, I saw that almost every washer had only a one-year warranty. Hmmm.
Repair Person recommended we look into Huebsch, sold in the US as Speed Queen. They manufacture washers for laundromats and hotels, and also they have a few consumer models, which are built to the same specs as the commercial machines. Repair Person doesn't sell appliances or earn commissions. He said, "If you can afford it, it will last the rest of your life."
I investigated. Huebsch washers and dryers cost about twice as much as standard consumer models from Whirlpool, LG, Samsung, and most other household brands. They are supposed to last decades, rather than years. There are only two authorized Huebsch dealers in the province, and amazingly, one is in Port McNeill!
I'm not thrilled at the expense, but to us this is a no-brainer. What's the point of spending $600 or $800 on a washer that will last less than 10 years?
My only hesitation was that the capacity of these washers is much smaller than those of the popular brands: 3.2 cubic feet, compared with 5 cubic feet or higher. Here's what I've learned. The other companies have competed to offer more and more capacity -- without improving the internal works. The motors of these large-capacity machines can't handle the loads, so the machines are destined to break down quickly. Huebsch has avoided this by sticking with the old-fashioned 3.2 capacity.
I wasn't completely sure that the Huebsch could accommodate our largest item, which would be a queen-sized comforter. I read online that 3.2 cubic feet was enough for a queen comforter -- but I couldn't take a chance. There's no drycleaner in our area, so if I couldn't wash a blanket -- including old blankets that certain dogs like to snuggle in -- I'd be out of luck. So just to be sure, we brought a (fur-free) blanket with us to try. It fit. End of story.
This is how we ended up spending $1,750 -- tax and delivery putting us at about $2,200 -- on a washer. According to everyone, it will run smoothly for at least 25 years.**
I'm fortunate, I'm privileged, we can handle this. But it is so wrong.
------
* Repair Person is disabled, and I'm guessing that only working out of his shop eliminates accessibility concerns. I didn't know this until we met him. It was great to see a wheelchair-user running his own business -- and he's quite senior, too. He sells mobility scooters and repairs computers, too. And in the summer lives on his boat. In my old writing life, this guy would make a great story.
** Next year, we are probably going to buy the matching dryer, to reduce our electricity use with a more efficient machine.
Posted by laura k at 11/27/2022 07:05:00 AM

In 2020 we bought IKEA furniture for our condo in Florida (yes, definitely privileged) because it was so much cheaper than "real" furniture and looks better than most cheap furniture. I then read recently that IKEA expects its furniture to last only five years. I was shocked and annoyed. I am hoping that since we only use the condo for three months a year that the furniture will last for twenty years instead of five. But seriously---I am sure no one buys their stuff expecting to replace it five years later. And where does all that pressed wood go when it breaks down? To a landfill, I'm sure.

Couches have not been as durable, but absolutely more than five years.

It's possible they've changed their business model? But our experience has been much better than five years.

Once upon a time, 100% of our stuff was from Ikea! Now that Ikea is no longer convenient, I also buy from Wayfair.

Also, why isn't furniture from Ikea real? Not being sarcastic, genuine question. It never occurred to me that their furniture is fake. I've always really liked the styles and looks available.

Earlier this year I replaced my, Coldspot, once used freezer that I bought in about 1978 !
It cost me $25.
Last year I replaced a 35 year old Honda mower ; yes with another Honda.
This year I retired ,after years of repairing various types of equipment .
Repairing rather than replacing provides many more GOOD paying jobs than low cost, low value, low quality products.

Trailblazer, I completely agree. However, repairs must exist and be accessible. The part that broke on the washer was not replaceable -- not made or sold anywhere. Purposely, no doubt.

Also, repairing doesn't provide jobs unless people are taught to repair, through apprenticeships and other opportunities. Our local colleges do invest in trades education. I'm glad for that.

My point is repairing rather than replaceing is easier said than done.

Oh, by "real," I meant grossly overpriced furniture that fancy stores sell that are probably not made any better. The kind you see advertised in fancy lifestyle magazines that I don't read but sometimes see ads for.

And wow, that's great that your IKEA stuff has lasted that long. At that rate ours should outlive us!

At that rate ours should outlive us!

That's what I'm hoping for this washer. :)

Blogger laura k said...
Trailblazer, I completely agree. However, repairs must exist and be accessible........

I beg to differ.
I was fortunate to grow up in a time and place,the UK, when the prevailing government mandated trades training .
This was done by the Government ,nationally, instituting a industry training tax that could be redeemed by showing proof of employing apprentices that were being trained at both the on hands employment level and at trades college !!
As an immigrant , though a long time ago, I am ever amazed that Canada still poaches the skills of those trained, often at government expense, from other countries ; often those that can ill afford the loss!!!

Blogger Amy said...
Oh, by "real," I meant grossly overpriced furniture that fancy stores sell that are probably not made any better.

Quality matters much less than being in vogue!!

As long as we accept mediocrity , we will receive it...

As long as we accept mediocrity , we will receive it...

This assumes that planned obsolescence and the decline in quality is consumer-driven -- which is ludicrous. Most of us accept mediocrity because that's what's available to us, and that's what we can afford.

It's not like quality products are being sold in the next town over, and we're just too lazy to go get some.

This assumes that planned obsolescence and the decline in quality is consumer-driven ....

I live south of town 25 kilometres to the main shopping malls.
Neighbours travel 25 kilometres to save $5.00 on a $20.00 item!
This is not unusual.
As for quality goods you are totally correct.
That said some of this comes about with the, average, disposable income of the area.

... And the shareholders' profits went up, the company showed "growth", so according to capitalism, they were doing the right thing.