what i'm reading: four lost cities: a secret history of the urban age by annalee newitz 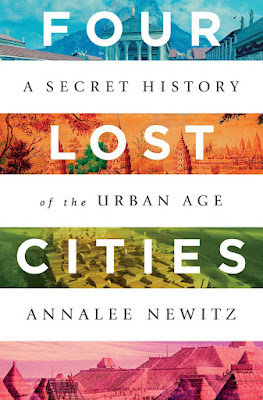 Four Lost Cities: A Secret History of the Urban Age by Annalee Newitz is a terrific book for anyone who shares this fascination. Newitz visits four sites of past societies: Çatalhöyük (Turkey), Pompeii (Italy), Angkor (Cambodia), and Cahokia (United States). She interviews archaeologists around the world, and reviews the latest research, much of which questions and contradicts previously held ideas about these places and the people who built them.

Unlike most archaeology of previous eras, current studies focus on the lives of ordinary people, rather than the elites. Studies are driven by data, rather than biases and preconceptions about values. She writes: "In a sense, data archaeology represents the democratization of history. It's about looking at what the masses did, and trying to reconstruct their social and even psychological lives."

The book is written in a light, breezy style, and full of fascinating insights and factoids.

In Çatalhöyük, the Neolithic settlement in modern-day Turkey, tiny living spaces were jammed together in a honeycomb of cells -- accessed through the roof, via ladders. The door to the outside was on the ceiling.

The people of Çatalhöyük did not value material wealth or an elite based on material goods. This is interesting, but less remarkable when one considers that they settled there after a nomadic existence. Hunter-gatherer and nomadic societies can't amass material goods: it would be antithetic to their survival.

In Pompeii, "middlers" -- a proto- middle class -- were formed by liberti, former slaves who participated in Roman society, and whose children became citizens. Although I've been to Pompeii and the nearby (and even more fascinating) Ercolano, I had no idea that the Roman government organized relief and re-settlement efforts on behalf of the survivors of the cataclysms of 79 CE.

For me, the most remarkable stories in Four Lost Cities are from Cahokia. I've seen some ancient mounds, as these North American earthworks are known, along the Natchez Trace in Mississippi. And I know about so-called Hopewell Culture in what is now southwest Ohio. But I had no idea that a huge archaeological excavation has been unfolding in Illinois.

A thousand years ago, huge pyramids and earthen mounds stood where East St. Louis sprawls today in southern Illinois. Majestic urban architecture towered over the sticky mud of the Mississippi River floodplains, and elevated walkways wound between densely packed neighborhoods, public plazas, and outlying farms. Ceremonial poles, painted and adorned with ritual objects, were planted in mound tops like signposts. The city was so impressive that word about it spread up and down the Mississippi and its tributaries, from Wisconsin down to Louisiana. Thousands of people came to the city, drawn by tales of its elaborate parties, pageants, and games. Some came to have fun, but others were in search of a new kind of civilization. Many visitors were so impressed that they never left.

The city became an immigrant sanctuary, its neighborhoods bursting with people drawn from cultures all across the southern United States. At the city's apex in 1050, the population exploded to as many as 30,000 people. It was the largest pre-Columbian city in what later became known as north America, and bigger than Paris at the time.

Unfortunately, Newitz doesn't adequately explain how much of this is known. Population size and trade routes are relatively easy to understand, based on what is found in a given site and the origins of those materials. But how do archeologists know why people migrated to a site? If this knowledge is indeed based on data, rather than assumptions, I would have liked more explanation of what led to these conclusions.

The book does touch on some of the process -- laser technology, stratigraphy, sophisticated soil analysis -- but I could have used more distinction between what is known and what is hypothesis.

At the end of the book, Newitz devotes an entire chapter to a takedown of Jared Diamond, author of Collapse and Guns, Germs, and Steel, among other books. I am a huge fan of both of those books, and while I understand that many prominent researchers disagree with Diamond's theories, this bit felt unnecessary and out of context. It also at least partially misrepresents Diamond's premise. And of course Diamond has no opportunity to respond.

Some of the criticism simply makes no sense. Newitz paraphrases an archaeologist who says:

And when it comes to Mayan "collapse," they point out that there are still millions of Mayans living in Mexico. Can a culture that still thrives really be said to have collapsed?

Diamond didn't say the Mayan people were extinct. Nor did he say their entire culture was obliterated. He wrote about the disappearance of the Mayan empire -- the organized society that built Chichen Itza, Tulum, Palenque, and dozens of other ceremonial sites. That empire most certainly did disappear, and it was already gone when Spain began its conquest of the area. The fact that there are still descendants of the people who built that empire does not prove otherwise.

Perhaps, as Newitz claims, Diamond has misled the public. Perhaps his theories are out of step with current archaeological thought (which doesn't necessarily make them wrong). Regardless, the portion of this book that supposedly responds to Diamond's theories seems misplaced and out of context.

Strangely, Four Lost Cities is marketed and promoted as something it is not. It is not a book about lessons that can be gleaned from the practices of past civilizations. On that topic, there are a few paragraphs at the very end of the book, but they are vague and entirely speculative statements one finds in general conclusions.

Perhaps, like the people of Pompeii, we'll muster relief efforts that help people rebuild in new places. We might attempt to design a radically different kind of metropolis, like Domuztepe, that continues the traditions of the previous ones while incorporating new ideas. Maybe this process will lead to more sustainable cities built in places that can resist the worst effects of climate change. That might sound like a Utopian impossibility, but not if we learn from our urban failures.

I wonder at the publishing decisions that led to this, as misrepresenting a book's subject matter could only lead to confusion or disappointment.

Despite this minor complaints, I very much enjoyed Four Lost Cities and recommend it if the subject matter interests you. Or if you dislike the work of Jared Diamond.

Thanks for this review. I have been to Pompeii twice now and it is fascinating. Sounds like I could add Ercolano, Çatalhöyük (Turkey), Angkor (Cambodia), and Cahokia (United States) to a travel list.

Ah, the travel list... something I am trying to let go of. *sigh*

Thanks for the review. I'm currently reading David Graeber and David Wengrow's The Dawn of Everything: A New History of Humanity, which covers some of the cultures you mention here. So far, it's very good.

Hi Dean, that book is on my list. It's getting a ton of attention and outstanding reviews.

There's also Origin: A Genetic History of the Americas by Jennifer Raff, which also sounds great. I'm especially interested in this because the author incorporated Indigenous ways of knowing along with the western scientfic evidence.