frank showler: called to be faithful 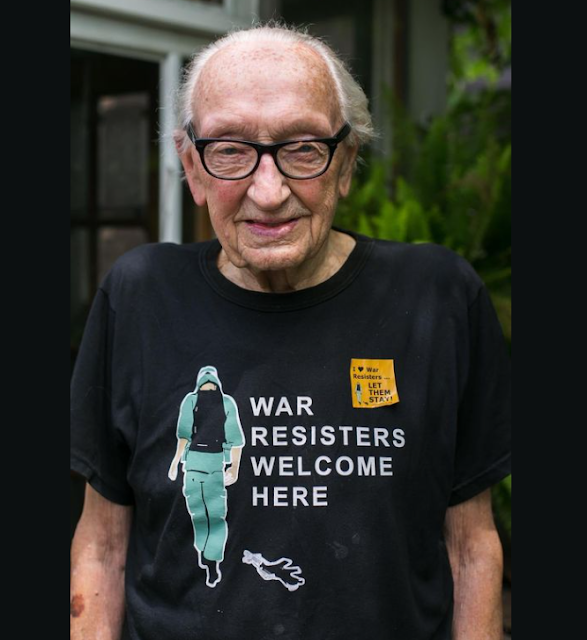 Frank was a foundational figure in the social-justice activist community, seemingly participating in every demonstration, rally, vigil, and campaign. It was a universal saying: It's not a demo until Frank shows up. And show up he did, to an astonishing degree.

Frank didn't just show up for causes. He showed up for people. He was one of the warmest, most generous, compassionate people I have ever met. Although everyone around me had known each other for many years, and I was a newcomer, Frank made me feel like an old friend. To Frank, no one was an outsider.

I met Frank through the War Resisters Support Campaign, which fought for the right of former soldiers who refused to participate in the invasion and occupation of Iraq to remain legally in Canada. I am incredibly fortunate that my path intersected with Frank's. The years of our friendship were but a small portion of his long life, but a treasured part of mine, a part of great value. (I feel this way about all my war resister campaign friends.)

Frank was a World War II war resister. For refusing to fight, he was arrested and sentenced to a series of work camps. When he was assigned alternative service working in a hospital, he organized the low-wage orderlies.

Doing refugee work in South America, Frank met Isabel, the beginning of a lifelong partnership in love and in movements. By the time I met Frank, Isabel had already died. But most people knew them as Frank and Isabel, inseparable.

Long ago, I wrote about an event Allan and I attended in Toronto, called "I Object: Three Generations of War Resisters Speak Out" (post is here; comments are missing). Although I am an atheist to my core, I will never forget something Frank said that night: War is contrary to the mind of Christ. A minister with the United Church, pacifist at the time, told him that. The church changed its unpopular stance, but Frank said he saw no evidence that Jesus had changed his mind.

If you asked Frank, how do you keep going -- bearing witness, protecting the weak, fighting for the disenfranchised, speaking out against war -- when the problems are so huge, and the powers are so great, he would reply: We are not necessarily called to be successful. We are called to be faithful.

Although I do not have religious faith, I hear this as a call to live our values. Something to always strike for, however imperfect our efforts.

Yesterday I attended a Quaker meeting (on Zoom) that was a memorial to Frank Showler. Everyone who spoke told the same type of stories. It was clear how deeply he will be missed. I encourage you to take some time and scroll through some of these Facebook posts memorializing him.

I was incredibly fortunate to know Frank, and I will miss him.