in which the cool coastal climate kicks my ass: my first #gardenfail

I decided to convert a small patch of the front yard, overflowing with plantings from the previous owner of our house, into a small garden. My experiences with my gardenettes in southern Ontario were all very positive. They were also very easy: buy seedlings, put them in the ground, feed and water them, and et voilá, vegetables.
This simple success has not followed me to my new home on the northern end of Vancouver Island. Unfortunately, there was more than one change, so I don't completely know what caused the failure. But failure it is.
I'm not strongly invested in gardening, hence the words "tiny," "modest," and "gardenette" always appearing in these types of posts. But still, some vegetables to show for my efforts would have been nice!
Here's what happened. (I didn't document this experience with photos; photos below are generic.)
I didn't find a lot of seedlings (little plants already growing in small containers) for sale, and I always hear people talk about starting gardens from seeds, so I thought I'd give that a try. Never having planted seeds before, I researched quite a bit.
I planted carrots and beets in the ground, and started tomatoes indoors.
The beets and carrots never sprouted. Not a single leaf of either plant appeared. I have no idea why.
In our cool, coastal climate, you're supposed to start tomatoes indoors, then cover them when you plant them outdoors.
We saved small styrofoam containers from takeout food. I poked a few holes in the bottom, filled them with potting mix, and planted the tomato seeds. 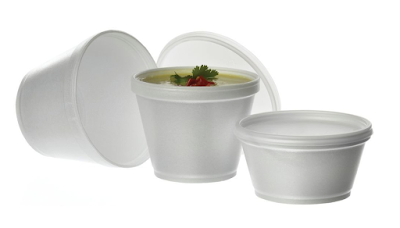 They sprouted quickly and grew bigger and stronger every day. I ended up with 14 plants growing in 10 containers. 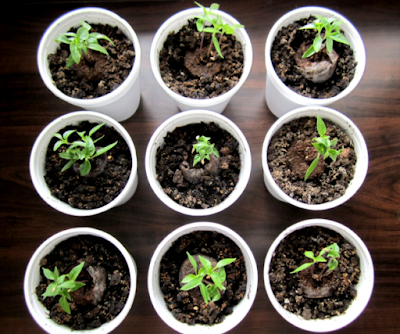 While the tomato plants were growing, we saved empty juice containers, then cut the bottom off, making a nice shelter for the plants. 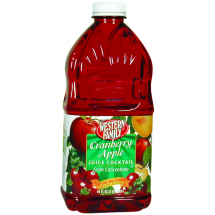 I waited until over-night temperatures were above 10 C (50 F), all the while saving juice containers and tending to the little tomato plants. When it seemed safe, I planted the seedlings and covered them, so they looked something like this. 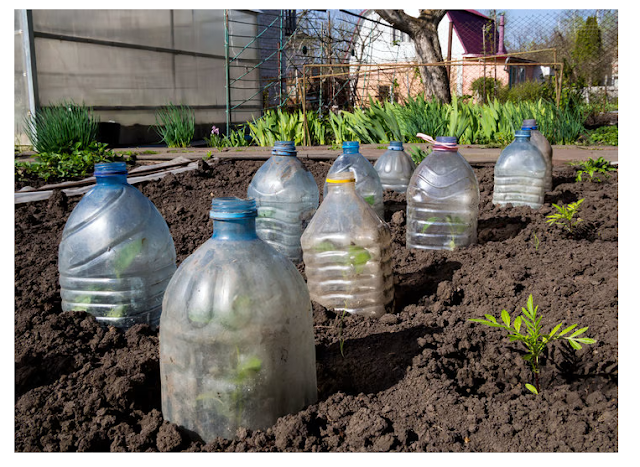 And then they died.
Not a single plant survived the transplanting.
I know from past experience that plants often wilt after transplanting, so I continued to tend to the them. But it soon became obvious that my plucky little seedlings were not making  a comeback.
So I have a garden space cleared, I've started vermicomposting in the garage, but I have no plants.
I'm done. For this year, anyway.
* * * *
Now I know why so many people in our area have a greenhouse in their backyard. There was a greenhouse in the yard when we bought our house, but we asked the sellers to remove it.
I really don't want a greenhouse, but I won't attempt to start a garden from seeds again. Next year I'll make a greater effort to find seedlings. And if I try tomatoes again, I won't put them in the ground until they're much larger and stronger, or maybe grow them indoors only.
Posted by laura k at 6/24/2021 06:48:00 AM

The ground was too cold. If you ever want to try again, get a table-top mini-greenhouse. Or plant in a mobile raised bed container you could wheel inside when necessary.

Just wanted to let you know I got the email notification for this one along with a list of At Your Library posts. I received it this afternoon, but have been away from my computer.

Abby, those are interesting ideas, thank you! Also thanks for commenting here and not only on FB! :)

Thanks Amy. I guess this means the email included links. So the system is working! Excellent.

Gardens can be very unpredictable and frustrating!

For the first time ever, this year my pea crop failed. As did my second attempt. As did my third.... Crows, rodents? Nearly the same with my corn--hundreds of seeds in the ground, a few dozen frightened-looking survivors.

Tomatoes. Sounds like you did everything right. If the overnight temps were in the 50s, they should have shrugged and thrived. The only tomato failure we've had was during an early June frost when seedlings that had been in the ground for a week fucking frozen to death.

I start my tomatoes indoors around tax day in April in hope of getting them in the ground six weeks later. Because they don't really get enough sun in my set-up, they become very leggy, but that is okay because tomatoes throw roots from their stems if those stems are laid on their side and buried. I hate to disturb the roots of seedlings so I use peat pots and simply tear the sides when the tomatoes go in the ground.

Only thing I can think of is those cold caps--did they come off during the day so the heat and humidity did not build up?

Thanks, John. It's good to be reminded of this!

Consensus in these parts seems to be that the ground was too cold. But who knows? I've also heard from friends that tomatoes are very difficult to grow on the Island and really need a greenhouse.

I kept the containers on all day, as I read to do, but only put the caps on at night.