picket lines, pupdates, and the 51st parallel: 10 things on my mind

It's been a while.

My mom went home two weeks ago, after spending seven weeks here. I was sad to see her go! We had a great time, and it got better as we went along and settled into a routine. The dogs must especially miss her. They loved to hang out in her room, and she adored them. 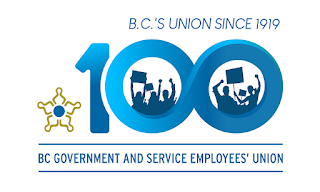 I was in Nanaimo this week, participating in some training with my union, the BCGEU. I had three days of courses, plus a full day of travel each way, so I was gone for the whole work week.

My workplace has an interesting union model. All the frontline staff are members of CUPE, and the professional staff -- librarians, senior librarians, and library managers -- belong to the BCGEU. This means I'm the only BCGEU member in all five of my libraries.

However, there are BCGEU members in many other workplaces in my area. It's a very diverse union that represents social workers, administrative staff, BC Liquor and BC Cannabis workers, correctional officers, and many others. I'll be available to assist members who want a representative from outside of their workplace.

The courses I took were excellent, but the best part of the trip was spending time with other labour activists, and getting to know the culture of my new union.

I had heard good things about the BCGEU, but it was wonderful to see this for myself. I learned that Stephanie Smith, president of the union, came up through the rank-and-file, as a new activist. Her election (and re-election) as the union's first female president, and as a former frontline worker, transformed the union from an old-boys service model to a progressive, member-driven organizing model.

I'm pretty sure this was the best part of the training!

4. Loggers are on strike. 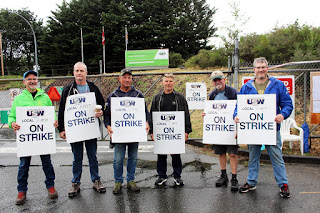 Forestry workers from USW Local 1-1937 are on strike against Western Forest Products, one of the largest employers on Vancouver Island. The strike is going into its fourth month, and there's no end in sight. Our North Island communities are severely impacted.

I was feeling really bad that I had done nothing to help these union brothers and their families. When the strike was called, we were closing on our house, then we were moving, then my mother was here... My focus was elsewhere, but every time we saw a picket site, I felt guilty.

Yesterday on my drive home from Nanaimo, I bought major quantities of snacks and some gas cards, and stopped at every line I passed. I also stopped into a USW office in Port McNeill: I figured a staff rep would know which families were most in need.

I visited seven lines, and should be able to hit two or three more this week. I admit much of this was to make myself feel better, but when you're on strike, picket support visits mean a lot. Presumably it wasn't an entirely selfish endeavour!

Our darling Cookie is driving us crazy. We're dealing with multiple issues: she's chewing stuff (not teething, just destroying), she's an escape artist, she has zero recall, and she seems to have developed separation anxiety.

Our friend Dharma Seeker has been consulting with us on training ideas, and suggested setting up a webcam. I learned how to make a webcam from two cell phones -- and we learned that Cookie does better when she's not crated. This was scary! The two young dogs alone in the house, not crated, could literally destroy everything. But it worked. Now they are confined to one room. We've dog-proofed the room as much as possible, and they seem calm and happy when we're gone.

This has resolved one issue. We have a long way to go.

We've learned the fence around our backyard is falling apart. Cookie has gotten out of at least four places.

Allan keeps working on it, but dog-fence whack-a-mole is a losing battle. We need to replace what's there with professional-grade stockade fencing. We're getting estimates, and it's not pretty. This is one reason we never wanted to own a home.

After ten years away from the pool, I've started to swim again. It's going to take a long time to get back my aerobic strength! But I have time.

I've discovered that I have little to no interest in gardening, which includes upkeep on the lovely landscaping that was already in place when we bought the house. If I didn't work full-time and if my joints didn't hurt, perhaps I would feel differently. But here in my real life, I just don't care.

Now I have a big backyard, a sizable front yard, and a whole mess of raised beds -- and I don't want to do anything with them. I'd love to find someone who loves to garden but who doesn't have one of their own. And doesn't mind dogs crashing through their work.

Port Hardy is not far from the 51st parallel, the farthest north we've ever lived.** Summer days went on forever; at 10:30 pm it was still twilight. Now, of course, we're about to experience the other side. It will be interesting to see how our habits change in winter. But one thing we know: we won't be shoveling snow!

* I don't watch Game of Thrones and I was sick of hearing Winter Is Coming.

** The farthest north we've ever been is Denali National Park: 63rd parallel.

I can't believe how much I love my job. It's the perfect mix for me.

Many librarians, as their careers advance and become more managerial, lament no longer leading storytimes. I haven't done those in years (except in an emergency) and I've never missed them! Storytimes are skilled work and very valuable to the community, but I didn't get a Master's degree so I could read to kids. To me that's a poor use of my skills and a waste of taxpayer money.