what i'm reading: collected (and amazing) nonfiction by saul bellow 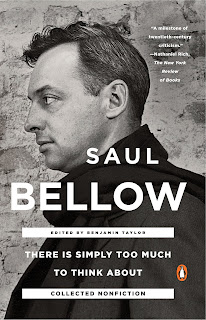 When the author Saul Bellow died in 2005 at the age of 90, I was saddened and disappointed by the scant attention paid to his passing. Bellow was one of the greatest writers of the 20th Century. His novels are still relevant, in a way that many of past generations are not. And his writing... his writing is simply astounding.

With this in mind, and my love of nonfiction, I looked forward to reading There Is Simply Too Much To Think About, a collection of Bellow's nonfiction. I assumed that Bellow's intelligence, insight, compassion, and precise command of language would make for some fascinating reading. I was right.

The essays, speeches, and literary criticism collected in this volume display a towering intellect, but not a cold one. Bellow's view of the world is always humane and compassionate. He observes keenly, he understands deeply, but he also feels deeply. His gift is the ability to convey that feeling in a way that feels completely novel, bringing the reader new insights into the human condition.

There Is Simply Too Much To Think About recalls, for me, my favourite nonfiction collection, A Supposedly Fun Thing I'll Never Do Again by David Foster Wallace. Both Bellow and Wallace are willing to play out a train of thought as far as it will take them, both broadly and deeply. Both were gifted observers who possessed an astounding command of language. But beyond all that (which is a lot), both observed with compassion, and with love.

At the time Wallace was writing the essays collected in A Supposedly Fun Thing, novels, film, and visual arts were stuck in the ironic mode. Everyone was jaded; everything was viewed with rolled eyes. Wallace wrote about the overuse of irony, and in his own work, he eschewed that orientation for something more meaningful, and more compassionate. (If you're not familiar with this, this piece in Salon may be useful, and if you want more, Wallace's "E Unibus Pluram: Television and U.S. Fiction".)

Bellow, of course, didn't grow up in a world of ironic observation, but he similarly comments on an orientation from his own eras -- the academy, and the theoretical approach to literature. In many of the essays in There Is Simply Too Much, Bellow discourses on his own methods as being free from theory. He digresses to tell us, in essence, that he writes from his heart and his mind -- and he hopes you will read with yours. Bellow wants us to stand in front of a work of art and gasp at its beauty, and be awed by the emotions that beauty stirs in us -- not read about that art in a guidebook, or worse, be told what it symbolizes.

The writing collected in There Is Simply Too Much, selected by Benjamin Taylor, is organized chronologically, but there's no reason to read it that way. For me this is a book to dip into, to read in bits and pieces, perhaps in between novels. The writing is extremely clear and precise, lively and not dense, but it's heady stuff, requiring time and thought. Reading it from start to finish could be a test of endurance, and there's no point turning such good writing into a drudgery.

These essays contain a huge number of references to people that readers may not be familiar with, both because their fame may not have made it to our era, and because Bellow must have been the most well-read man in the world. Some of the references I knew, others I was able to understand through context, and for a few, I employed Google. In the endnotes, editor Benjamin Taylor explains:

Bellow's references are typically to well-known persons and phenomena and I have preferred not to impose on the reader with unnecessary footnotes. If certain of his allusions are less familiar, details about Viscount Bryce, Elbert Hubbard, Freud's Rat Man, Boob McNutt, Colonel Bertie McCormick, Billie Sol Estes and Oh! Calcutta! are nowadays at one's fingertips.

The book jacket blurb calls this book "a guided tour of the twentieth century...conducted by one of modern life's most inspiring minds". I'll go with Taylor's words, as he thanks Janis Freedman Bellow, Bellow's wife and partner: it is "a book of wonders".
Posted by laura k at 7/31/2018 06:30:00 AM