what i'm reading: pit bull: the battle over an american icon 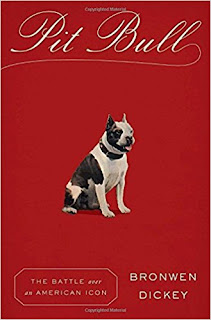 If you have an opinion about pitbulls, chances are good that it's based on myth, misinformation, and even disinformation. I know a good deal about dogs, and I thought I knew a lot about pitbulls, yet I was constantly amazed and enlightened by Bronwen Dickey's Pit Bull: The Battle Over an American Icon.

Here are some of the things you will learn if you read this book.

There is no agreement on what a pitbull is.

No one can correctly identify a dog's breed-mix based on the dog's appearance, including experts.

Many or most media stories about pitbulls are based on uncorroborated heresay and myths, and many are actually fiction.

Accurate statistics about dog bites, especially those that account for severity, do not exist.

Reading this book, you will consider connections between the media's portrayal of pitbulls and racism, between fear of pitbulls and fear of urban youth, the dynamics of a social phenomenon known as "moral panic", and how the moral panic over pitbulls mirrors the one about crack cocaine. And did you know that in pre-Civil War America, dogs of slaves were confiscated and put to death, as were dogs in Jewish homes in Nazi Germany?

All this might be merely interesting, or perhaps fascinating, if ignorance and moral panic didn't inform law-making. Sadly and infuriatingly, this is not the case. Thousands of dogs labeled as pitbulls that never harmed anyone or showed any signs of aggression have been killed. Thousands of people were forced to choose between their beloved dogs and homelessness, when any dog deemed a pitbull was banned from most public housing and much private housing. This is not about a dangerous dog being euthanized. This is the wholesale round-up and (attempted) eradication of dogs based on appearance only.

In one of the many insightful looks into media coverage of dog-bite stories, Dickey uncovers the total lack of credentials, expertise, and experience of the owner of a professional-looking website called dogsbite.org. She notes that on one side of the so-called debate are the Center for Disease Control, the American Veterinary Medical Association, the American College of Veterinary Behaviorists, the National Animal Care and Control Association, the Animal Behavior Society, the Association of Professional Dog Trainers. and all but one animal welfare organization. On the other side, the owner of an attractive website with unsourced claims. But the media, in the name of "balance", will give these two sides equal weight, without questioning where dogsbite.org gets its information. The answer is: they make it up.

Dickey introduces the reader to two important, remarkable organizations: the Coalition to Unchain Dogs, now called Beyond Fences, and a Humane Society program called Pets for Life. In the past, the only thing animal control organizations could do for neglected dogs was remove them from homes -- a chilling echo of how children were removed from certain homes under the guise of protection. These two groups help people keep their animals, by offering free veterinary care, free quality dog food, and free dog-care education. Because -- go figure -- it turns out low-income families love their animals just as much as affluent families. The descriptions of dogs and people whose lives have been transformed by the dedicated people of these organizations are the most beautiful and hopeful parts of this book.

Dickey introduces the reader to many amazing people -- dedicated rescuers and trainers, as well as people who are amazing for all the wrong reasons -- amazingly ignorant, willfully ill-informed, and close-minded, determined to rid the world of one supposed breed based on a refusal to acknowledge facts.

Dickey's book is a tour de force of research and synthesis. It's not so much a book about dogs, as a book of history, sociology, science, and information studies where dogs are the organizing principle. I wish that everyone who has an opinion about pitbulls was required to read this book.
Posted by laura k at 7/14/2017 04:52:00 AM