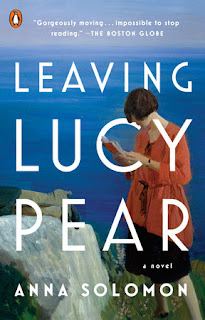 The year is 1917. A teenage girl from a wealthy family is pregnant, the result of rape -- by a man who her mother pushed her to pursue for marriage. Now the girl is being forced to surrender her baby to an orphanage. She has met the person who runs the orphanage, and she cannot bear the thought.

The girl devises a plan, a way she can leave her infant daughter to be found by a large family who will, she hopes, raise her as their own.

Leaving Lucy Pear by Anna Solomon begins with this tantalizing and emotionally charged premise, and as the story unfolds, it does not disappoint. Family secrets, desire, regrets, unintended consequences, and unfulfilled longing are set against a backdrop of Prohibition, labour justice, and classism.

In the larger world, Sacco and Vanzetti are scheduled for execution, despite global protests.* The political situation parallels our current world in many ways.

Through Solomon's clear and often piercing prose, we know what every character thinks and feels -- leading us to see the enormous chasm of perceptions, the impossibility of knowing another person's truth. The book is infused with empathy and compassion. It makes for a satisfying and compelling read.