in which we answer the burning question: "what kind of dog is that?"

What kind of dog is that?

People ask this all the time. All our dogs have been rescues, but most had recognizable breed markers. We could answer "white Shepherd-Husky cross" or "Lab-Shepherd mix" or "Jack Russell-Fox Terrier cross".
Of course those dogs probably had many other breeds in the mix. When you think about it, unless a dog is actually the product of two purebreds, it's likely to be the product of dozens of different breeds. A mixed breed mates with another mixed breed, and their puppies mate with other mixed breeds, and so on. But people really want to hear two or three breeds! So I'd go with the obvious, and that answer would satisfy.
With Diego, I've never known how to answer. I've thought of making up a breed -- a Burnhamthorpe Terrier, for a street we live near, or a York Hound, for the Toronto North York animal shelter where we found him -- but I never seem to think quickly enough. Sometimes I say he's a Border Collie-Boxer mix. But mostly I say, "He's a mutt," or "He's a mix of many things. His own unique blend."
Because really, who cares? He's Diego! 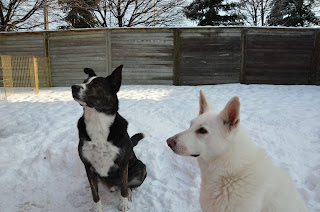 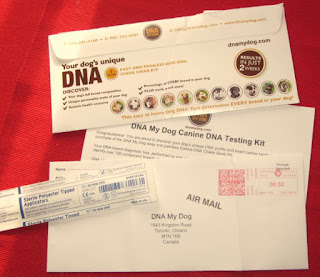 I first heard about DNA testing for dogs at the dog park -- a couple were having their rescued German Shepherd tested to see if he was actually a purebred. Yuck! But when we learned it was pretty affordable, we thought it would be fun to know what breeds might have left their pawprints on our Diego.