Back in August, I started re-watching M*A*S*H end to end on Netflix. I promised updates... and here we are. (tl;dr: it's great.) Random thoughts below. 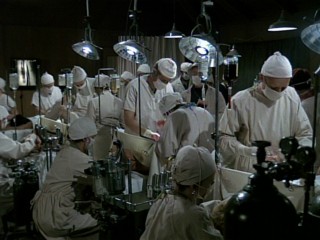 A huge number of M*A*S*H episodes have no plot whatsoever, but are a series of unconnected scenes or vignettes. These aren't clip shows, as the scenes have not aired before.

For many years Allan and I have called any TV show comprised of vignettes and framed by narration "Hawkeye writes home". We both remembered M*A*S*H frequently using this structure, with Hawkeye writing a letter to his father. Turns out there's a reason we remembered it: it's used all the time. In the first season alone, there were three Hawkeye-writes-homes, two narrated by Hawkeye and another by Henry Blake. This remains a constant from season to season: Radar writes to his mom, Henry Blake writes to Lorraine, BJ writes to Peg, Colonel Potter writes to his wife. In most shows I would call it lazy writing, but here the writing is so good, I just go with it.

Every episode of M*A*S*H has two distinctly different parts, with two different feels: the operating room and everywhere else. The distinction is achieved by what must have been a very bold move in its day: there's no laugh track in the OR. (Much is written about this online; producer Larry Gelbart talks about it here.) In the absence of canned laughter, Hawkeye's bon mots are revealed as grim, gallows humour. Hawkeye's and BJ's commentary on Frank Burns' inferior surgery techniques becomes deadly serious.

In Season 3, the episode "O.R." is set only in the OR - which means that there's no laugh track at all, for the entire show. It's extremely fitting, as the episode is not funny: it's an indictment of war. (There's some good commentary on this episode, including a quote from Gelbart, here.)

Season 4 ends with a famous episode called "The Interview," in which a journalist - apparently an actual war correspondent playing himself - interviews the cast. It's another Hawkeye-writes-home, written by Gelbart himself, shot in black-and-white, with no laugh track - also with no laughs. This episode is clearly not intended to be funny.

When I started this re-watch, I wondered if these serious episodes would be maudlin or overly sentimental. They are not. They are hard-hitting and heartbreaking.

I know that M*A*S*H was a commentary on the Vietnam War, but I didn't remember how far it went as a commentary on all wars generally. One way this is achieved is by having serious, honourable characters make anti-war statements. Colonel Potter, who fought in both World Wars, will often comment on the waste, the futility, the brutality, the unfairness of war. He is an honest and revered figure, a career soldier, yet he understands war only as a necessary evil - and often questions the necessary part. Pro-war statements, on the other hand, only come from buffoons - Frank Burns, Colonel Flagg, and other bit roles.

The future-famous-actor cameos ended early. Since my last M*A*S*H post, only Alex Karras and Mary Kay Place have appeared. Mary Kay Place (who I adore) was absolutely unrecognizable, but I'd know her voice anywhere. She also co-wrote the episode. Of course, there might have been guest appearances by people who were known in real time, but wouldn't necessarily be remembered by a 21st Century viewer.

Here's something that dawned on me slowly: the most important character of the show isn't Hawkeye, it's Radar. Walter "Radar" O'Reilly is the thread that ties all the characters and scenes together, the one character who has reason to interact with every other character, in any setting. Over the seasons, Radar's character develops with both humour and pathos, and Gary Burghoff's performance is brilliant. When I watched M*A*S*H in real time, as a child, I was always confused by Radar's age: other characters talked about him like he was a teenager, even a kid, yet he was clearly an adult. I mean, he was balding! Watching it now, I still note his hairline, but it's very clear that the character is meant to be a young person.

And finally, a note about M*A*S*H's theme music. There's no cold open, and the show opening with those first minor-key notes, as the helicopters hover, preserves a plaintive feel. The music builds as the medical staff race to receive the wounded. The music is sad, and urgent, and very effective. In the first four seasons, however, one note was bothering me. Literally one note. As strange as this might seem, the final note of the theme music was out of place. It sounded comical, with almost a zany sitcom feel, more fitting for Gilligan than Hawkeye. It bothered me in every episode. Then, amazingly, in Season 5, the note is gone. Apparently I'm not the only person who heard an incongruity in this note. The producers cut one note from the theme music, and that changes the viewer's expectations from sitcom to serious.

Update. How annoying! I just found some notes I made with more inconsequential M*A*S*H information. It doesn't warrant its own post, so...

I was wrong about the disappearance of the guest stars. I spotted John Ritter, Terry Garr, Robert Alda (Alan's father), and Michael O'Keefe. I'm thinking that many other small parts were played by actors who were known in their day.

In one episode, Colonel Henry Blake remarks that they watched a double feature: "The Blob" and "The Thing". Now, The Blob holds a very special place in my life; perhaps I will blog about it at some point. The original The Blob came out in 1958. The Korean War began in 1950 and ended in 1953.

For "The Thing", the only similar title I found was the 1951 "The Thing from Another World." Making up a title, no problem. Using the title of a real film that wasn't out yet... you can bet the producers got cards and letters about that one.