what i'm reading: fallingwater rising, biography of a building 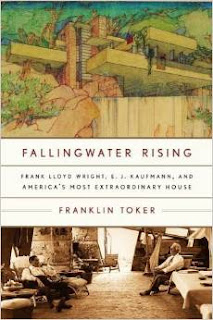 In the prologue to Fallingwater Rising: Frank Lloyd Wright, E. J. Kaufmann, and America's Most Extraordinary House, author Franklin Toker writes, "Put this book down now if you can't live without the old myths about Fallingwater. But take comfort in the fact that a Fallingwater history shorn of miracles can still be thrilling."

Toker examines those old myths, and one by one, he uses his extensive and impeccable research to dismantle them. The truth, for me, was far more interesting.

I visited Fallingwater in 1999, and although I have a great interest in architecture and am captivated by that house, I thought a biography of a single building might be too detailed for my level of interest. I was wrong. The book does contain quite a lot of detail. But through that detail, and through his nearly palpable passion for his material, the author reveals the magnificence of Fallingwater and explicates the full depth of its meaning.

Toker weaves a social and cultural history of Fallingwater, placing it in context of Wright's career, Kaufmann's aspirations, the Depression, and the conflicting forces of architecture that were raging at the time. He shows how Fallingwater was sold to the American public, and how that hype permanently changed the country's perception of art and architecture. He analyzes what Fallingwater means in the context of art history and American identity. As Janet Maslin wrote in her review for The New York Times, "Nothing about the way Fallingwater was built, conceived, influenced or manipulated escapes the author's attention."

Some of Toker's claims border on the speculative, but he meticulously presents his evidence and makes his case, leaving the reader to decide if he's made too great a leap. Given that he spent nearly 20 years researching this book, the evidence is always substantial.

I was fascinated to learn that on the eve of Fallingwater's conception, the architecture community considered Wright washed up, a has-been. He had not completed a building in 13 years, and his work was thought to have become repetitive and - the worst insult possible - regressive. At almost 70 years old, Wright was living in relative isolation, both his personal life and his professional life mired in depression. Yet his two most famous, recognizable buildings - Fallingwater and the Guggenheim Museum - were still ahead of him. By the time he died in 1959 at age 91, Wright would be, without exaggeration, the most famous architect in the world, leaving behind an unrivaled body of work. How Wright transformed his career, his image, and the face of architecture through this one building is an amazing tale, and Toker tells it with the sparkling writing and wit.

Incidentally, this book is a great eye-opener for those who reject certain art based on the politics or personal life of the artist. Wright, it appears, was staunchly anti-Semitic, although his two most famous buildings were created for Jewish clients. He admired the Nazis and the Third Reich, and disliked that "the Jews" were leading the U.S. into war. (Anti-Semitism and fascist tendencies are one of the threads running through this book, and very relevant to Fallingwater's context.) Wright was also a raging egotist who abandoned his wife and six children to have an affair with a client's wife. Wright the man was not exactly an admirable character. Wright the architect was a visionary and a genius.

Another note: I highly recommend keeping some internet-enabled device on hand while you read Fallingwater Rising. Toker references dozens of buildings, and few readers will be able to conjure mental images of each one. I kept my tablet handy, and did an image search for every building mentioned. This provided me with a context I wouldn't have found in the book alone, plus I ended up with a new short-list of buildings I'd like to see on my travels.
Posted by laura k at 6/15/2015 06:00:00 AM