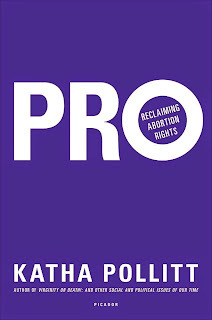 Katha Pollitt's new book, Pro: Reclaiming Abortion Rights, is a powerful gust of fresh, clean air that blows away the toxic stench of the current discourse about abortion.

Pro is a thorough, no-holds-barred takedown of the hypocrisy of anti-abortion-rights movement - not only in the most obvious sense that people who claim to be "pro-life" also (usually) support war and the death penalty, oppose gun control, and encourage lethal terrorism against abortion providers and clinic staff, and of people who claim to care about women and children, but oppose all social supports that might improve the lives of actual living children. Pro also exposes the perhaps less obvious hypocrisy of how the anti-abortion movement has created conditions that result in more unwanted pregnancies, more abortion, more later abortions, and less safe abortions. Using unassailable logic and facts, Pollitt exposes what the real agenda of the anti-abortion movement is and has always been: punishing women for trying to live modern, emancipated lives.

She exposes, too, the contradictions in how the current abortion debate is framed, and how the majority of people - not the vehemently pro-choice or the vehemently anti-abortion, but the "muddled middle," as Pollitt calls it - thinks about abortion. The vast majority of North Americans, it appears, believes abortion should be safe and legal, but also regard the procedure with distaste, discomfort, and shame. Pollitt makes it sparklingly clear why "legal, but..." doesn't work, why it can't work, and why we shouldn't want it.

This book is about something many people might find a strange contradiction: reclaiming abortion as a social good.

First, the concept of personhood, as applied to the zygote, blastocyst, embryo, and at least until late in pregnancy, fetus, makes no sense: It's an incoherent, covertly religious idea that falls apart if you look at it closely. Few people actually believe it, as is shown by the exceptions they are willing to make.

Second, the absolutist argument that abortion is murder is a mask by which people opposed to the sexual revolution and women's advancement obscure their real motives and agenda: turning back the clock to an idealized, oversimplified past when sex was confined within marriage, men were the breadwinners and heads of families, Christianity was America's not-quite-official religion, and society was firmly ordered.

Third, since critiquing what came before does not necessarily help us move forward, I want to help reframe the way we think about abortion. There are definitely short-term advantages to stressing the anguish some women feel when facing the need to end a pregnancy, but in the long run presenting that as a general truth will hurt the pro-choice cause: It comes close to demanding that women accept grief, shame, and stigma as the price of ending a pregnancy. I want us to start thinking of abortion as a positive social good and saying this out loud. The anti-abortion movement has been far too successful at painting abortion as bad for women. I want to argue, to the contrary, that it is an essential option for women - not just ones in dramatic, terrible, body-and-soul destroying situations, but all women - and thus benefits society as a whole.

For anyone deeply involved in the pro-choice movement, as I have been, Pollitt breaks no new ground. You'll be familiar with all the ideas, trends, and arguments. But to read them all gathered together, laid out logically, backed by impeccable research, and pronounced without apology in Pollitt's lively, witty style, is thrilling.

For people who think of themselves as "pro-choice but" - the muddled middle, the majority, who say abortion should be legal and permissible in certain circumstances - this book is for you. Pollitt argues in the clearest, most convincing manner: none of your restrictions make sense. All of them must go. If that seems extreme, read this book with an open mind, then see how you feel.

Pro is written in a US context, and it's important for everyone in the US to read, especially moderate liberals who adopt the "safe, legal, and rare" position.

But this is an important book for Canadians to read, too. Without directly referencing the history of abortion rights in Canada, Pollitt shows us why Dr. Henry Morgentaler and the movement that grew around his work were correct to insist on no abortion law, and why Canada's courts were correct to realize that was necessary. The arguments in Pro explain why the pro-choice movement in Canada kicks up such a loud and sustained noise every time proposed legislation threatens to restrict abortion rights. (The Harper government has tested the waters many times under the guise of private members' bills. Rights don't protect themselves.)

Pollitt argues for abortion as a basic human right: necessary to women's full participation in society, necessary for her survival and her safety, not just in extreme circumstances, but in all circumstances. She excoriates the hypocrisy of a society that worships motherhood as an abstract concept, but in reality, so belittles and minimizes the experience of parenthood as to imagine that a woman can simply have a baby and raise a child any time she becomes pregnant, no matter her current life circumstances - then dismisses the notion that she must do otherwise as abortions "for convenience".

Pollitt also widens the lens to include all aspects of reproductive justice, including access to affordable and reliable birth control, free and affordable childcare, paid parental leave, and working hours designed for working parents. She places abortion in an historical context - it has always existed, in all societies and in all eras - and reminds us what happens to women who live in Ecuador, Ireland, most of the US, and other countries where women's access to this basic, necessary health care has been denied.

After teasing out the many sacrifices, the pain, the accommodation, the compromises, that women routinely make in order to bear children, Pollitt writes:

To force girls and women to undergo all this against their will is to annihilate their humanity.

And that is the bottom line.