what i'm reading: the immortal life of henrietta lacks, by rebecca skloot 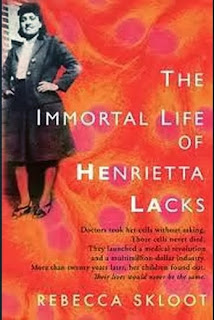 I've just finished The Immortal Life of Henrietta Lacks, by Rebecca Skloot. I’m sure many of you have read it, but if you have not, please run to your local library or bookstore or website and borrow, purchase, or download a copy immediately. This book is literary nonfiction of the highest order, a melding of social, cultural, and science history, and a triumph of research and writing.

Henrietta Lacks was an African-American woman, a poor tobacco farmer who lived near and in Baltimore. Henrietta died of cancer in 1951, at the age of 31. She left behind five children, destined for poverty and all manner of abuse. She also left behind, without her knowledge, some cancer cells that doctors at Johns Hopkins University Hospital removed for study. Those cells, and their descendants, would help Jonas Salk to develop the polio vaccine, and would continue to form the basis of cell research around the globe for decades, continuing to this day.

Those cancer cells and their descendants are known as HeLa, short for Henrietta Lacks. While HeLa cells were multiplying around the globe, while students and scientists and doctors were studying HeLa, injecting HeLa cells into every type of test imaginable, the Lacks family had no idea that cells were taken from their mother and that those cells lived on. Twenty years later, the knowledge would rock their world.

There are also the moral, ethical, and legal implications of the HeLa story. Although textbooks referred to Henrietta Lacks as the “donor” of HeLa cells, Henrietta was never informed that doctors were taking her cells, she was never asked, and was never able to give consent. This fact places Henrietta Lacks in the context of a complicated story of race, poverty, genetics, and human experimentation. Skloot unpacks these issues in the clearest and most compelling manner I can imagine.

And finally, there is the story of Rebecca Skloot, and her obsession that drove her to uncover the real story behind both Henrietta Lacks and HeLa, and to befriend Deborah Lacks. The two would form an unlikely and powerful bond that would change them both.

This is also a book full of subplots and minor threads, two of which I found particularly compelling, and unbelievably sad. One of Henrietta’s son, Deborah’s brother, was horrifically abused (tortured, really) after his mother's death. As an adult, he is violent and out of control, unable to master his constant anger. At one point in the book's narrative, he is sleeping on the street, signing up for medical experiments in exchange for food and a bed. In his story, we also get a glimpse of the transforming power of love and respect.

Another of Henrietta's children, and another subplot of the book, was Elsie, the sister Deborah never knew. Elsie had epilepsy, and at least partial deafness, and possibly other mental disabilities. When Henrietta could no longer care for her, the family talked her into putting Elsie in an institution. I'll stop there to avoid spoilers. Suffice to say Elsie's story was, for me, the very saddest part of this book.

One of the book's many fascinating subplots looks at the history of medical experiments on human subjects. Many of us are familiar with some of the more egregious examples of nonconsensual human experimentation, such as the Nazis performed on inmates of their death camps, or such as the Tuskegee experiments. But did you know that medical experiments were routinely performed on prison inmates in the U.S., without their consent? That patients in a hospital for a routine surgery might be injected with cancer cells, but told they were being inoculated against infection? The story of human experimentation without informed consent in the United States is shocking even to those of us who hold no illusions about that country.

The hidden history of how these hideous practices began to change - begun by an act of resistance from three doctors - is also fascinating. Scientists cried that informed consent would be the death of science, that without uninformed human subjects, all medical advancement would come to a halt - just as they claim today about experiments on animal subjects.

By coincidence, I recently read Home, Toni Morrison's 2012 novella, which touches on the so-called "Mississippi appendectomy," the forced sterilization of poor African-American women by white doctors. So when the Lacks family fears that the Johns Hopkins doctors did something evil to their mother, those fears must be seen in context of this very painful history. The review in The Guardian notes:

The dark, inhuman face of unpoliced science shows itself throughout this story, side by side with the bright face of discovery and humanitarian advance. The ironies are no less bitter because they are plain: today, Henrietta's descendants cannot afford health insurance. Henrietta was buried in an unmarked grave, in a cemetery with her black ancestors, and with white ancestors who, when the author inquired, would not acknowledge her.

Skloot’s journey with the Lacks family and the triumphant book that it produced are a nonfiction writer’s dream. Here the journalist’s story is not just about persistence and obsession (although it is certainly that) but also about patience, honesty, empathy, and trust. Skloot worked hard to win Deborah Lacks' trust - constantly and repeatedly - and both sides were amply rewarded.
Posted by laura k at 12/29/2013 05:00:00 PM