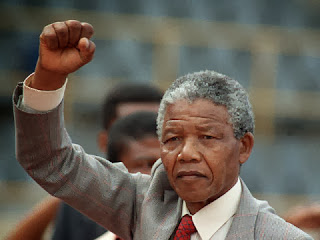 "The time comes in the life of any nation when there remain only two choices – submit or fight.

That time has now come to South Africa.

We shall not submit and we have no choice but to hit back by all means in our power in defence of our people, our future, and our freedom.

Firstly, we believed that as a result of Government policy, violence by the African people had become inevitable, and that unless responsible leadership was given to canalise and control the feelings of our people, there would be outbreaks of terrorism which would produce an intensity of bitterness and hostility between the various races of this country which is not produced even by war.

Secondly, we felt that without violence there would be no way open to the African people to succeed in their struggle against the principle of white supremacy. All lawful modes of expressing opposition to this principle had been closed by legislation, and we were placed in a position in which we had either to accept a permanent state of inferiority, or take over the Government.

We chose to defy the law.

We first broke the law in a way which avoided any recourse to violence; when this form was legislated against, and then the Government resorted to a show of force to crush opposition to its policies, only then did we decide to answer with violence."