When I read Stephen Fry's open letter to the IOC, and the continued calls to boycott or move the Sochi Games because of the horrendous and institutionalized homophobic violence within Russia, I couldn't help but think of the Beijing Games. I absolutely understand the uproar over Russia's anti-gay laws, and I agree, of course. But did the same people make so much as a peep when the Olympics were in Beijing? China is one of the worst human rights offenders on the planet, but all I heard during the Beijing Olympics was "Go Canada". 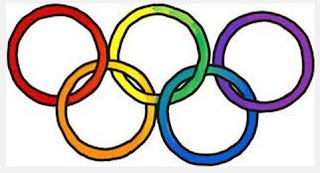 I personally boycotted the Beijing Games (here's why), then soon discovered that I was done with the Olympics altogether. And certainly everyone who feels disgusted and offended at the homphobia emanating from Russia should personall boycott the games if that's what feels right to them. But Sochi is hosting, and that's not going to change. What can the people who'll be there do?

Rosie DiManno has the right idea. DiManno and I disagree on many things, especially on One Big Thing. But DiManno has been relentless on Toronto's Mayor Crack, as she is about police violence and abuse. And I think she's on the money on what needs to happen in Sochi.

American figure skater Johnny Weir intends to be his flamboyant gay self at the Sochi Olympics.

BBC presenter Clare Balding, best in show for sports commentary at those Games, will anchor 100 hours of Olympic coverage — undoubtedly as knowledgeable and frank as ever.

I defy any Russian government authority to drag an athlete off the medal podium or a lesbian personality out of the broadcast booth for the crime of making a pro-gay gesture or statement.

It won’t happen. The imbecilic legislation passed in June will be not merely ignored but exposed for all its ridiculous, draconian ambition. The athletes, primarily, will see to that. Throughout the history of the modern Games, they have always been the ones who’ve rescued the Olympics from politics, ideology and craven greed.

The most iconic image of the 1936 Olympics in Berlin — the Nazi Games — is Jesse Owens accepting his gold medal, on four occasions, even while German rivals gave their “Heil Hitler” salutes. A black man put the boots to Aryan racial superiority, with a sour-faced Hitler looking on.

While too much of a burden is routinely placed on athletes to exemplify something other than their sporting pre-eminence, in Sochi they will once again transcend the rhetoric and ranting on all sides with memorable performances. That’s as it should be. There will be no boycott, no moving of the Games to another city, as some have promoted. Logistically, it’s impossible. Morally, it’s on slippery turf.

Only once has the IOC cleaved to a moral compass — banning apartheid South Africa from the Games from 1964 to 1992. Meanwhile, African-American 200-metre medallists Tommie Smith and John Carlos were expelled from the Mexico Games for raising their fists on the podium in the Black Power salute.

If respecting human rights was a criterion for the IOC, they wouldn’t have awarded the Games to Sochi in the first place, or to Beijing in 2008. But it’s done and political protests that primarily punish athletes are intolerable.

The futility of this gambit repeatedly: President Jimmy Carter pulled the U.S. out of the Moscow Summer Games in 1980 over Russia’s invasion of Afghanistan, with Canada and more than 60 other countries following suit. (Twenty-one years later, it was America’s turn to invade Afghanistan.)

In Montreal, 1976, 24 countries boycotted the Games, objecting to the inclusion of New Zealand because their rugby team had played a match in apartheid South Africa. In 1984, it was the Soviet Union and its allies passing on Los Angeles in retaliation for 1980.

Many athletes only had that single shot at an Olympics. Who remembers now the sacrifices forced upon them, because politicians were gaming the Games?

So go, gays. Be proud, raise the rainbow flag, kiss your same-sex partners in the stands, scorn the stupid law. If any athlete is persecuted or prosecuted, the media will have your back.

For 17 days in February, let’s all be citizens of Queer Nation.