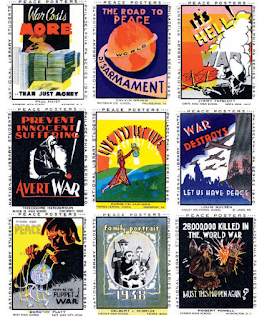 They weren’t, all of them, against personal or familial self-defense, or against law enforcement. But they did hold that war was, in the words of the British pacifist and parliamentarian Arthur Ponsonby, “a monster born of hypocrisy, fed on falsehood, fattened on humbug, kept alive by superstition, directed to the death and torture of millions, succeeding in no high purpose, degrading to humanity, endangering civilization and bringing forth in its travail a hideous brood of strife, conflict and war, more war.”

"They tried to save Jewish refugees,” I wrote, “feed Europe, reconcile the United States and Japan, and stop the war from happening. They failed, but they were right."

If we don’t take seriously pacifists like Cronbach, Hughan, Kaufman, Day, and Brittain — these people who thought as earnestly about wars and their consequences as did politicians or generals or think-tankers — we’ll be forever suspended in a kind of immobilizing sticky goo of euphemism and self-deception. We’ll talk about intervention and preemption and no-fly zones, and we’ll steer drones around distant countries on murder sorties. We’ll arm the world with weaponry, and every so often we’ll feel justified in taxiing out a few of our stealth airplanes from their air-conditioned hangars and dropping some expensive bombs. Iran? Pakistan? North Korea? What if we “crater the airports,” as Senator Kerry suggested, to slow down Qaddafi? As I write, the United States has begun a new war against Libya, dropping more things on people’s heads in the name of humanitarian intervention.

Hi! Could you please send me a copy of this essay? federicogermanabal@gmail.com