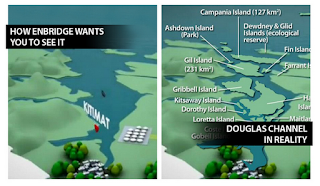 What's wrong with this picture?

Lori Waters knew what was wrong. Waters, who lives in BC and designs scientific graphics, recognized that 1,000 kilometres of island coastline was missing from the map, giving the appearance of a broad, clear channel - one that might accommodate oil supertankers with a degree of safety that does not exist. Waters' media release:

A BC woman who designs scientific graphics for a living today filed a formal complaint with the federal Competition Bureau claiming Enbridge is misleading the public with promotional videos that have erased the numerous and intricate web of more than 1000 square kilometres of islands along the proposed Northern Gateway tanker route. Since the Vancouver Island resident made a corrected graphic two days ago showing Enbridge's omission, it has gone viral with over 8,000 shares. The graphics have been remixed by citizens and community groups into videos, infographics and photos.

The original video advertisements appeared on Enbridge's website and YouTube and are among the company's key promotional pieces for their pipeline project and have been used by several media outlets in stories since late last year. Since the controversy broke in the media yesterday, Enbridge hastily beat a partial retreat, removing the offending image from one of their videos, and making the existing disclaimer more prominent in another. The offending video remains a prominent feature on the company's website, and is being widely shared on the Internet and through social media. The controversy comes amid shaken public confidence in Enbridge as a result of a scathing US National Transportation Safety Board report that concluded Enbridge's pipeline operations showed a "culture of deviance" on safety procedures.

"What Enbridge has done is to distort the maps in its promotional videos to erase numerous islands and twisting passages so that tanker route appears much safer than it is," said Lori Waters, who has a graduate degree specializing in scientific animation and owns a biomedical communications company. "Enbridge continues to offer this misleading video to the public, and it can't be trusted. Quickly pulling their fake map out of one ad, and slapping a disclaimer at the front of the other ad confirms for me that something weird is going on, and I've included that in with my complaint."

Waters is the mastermind behind a corrected graphic that has gone viral on social media over the past two days. She put together a few simple slides showing Enbridge's depiction of the tanker route along with the same graphic that includes the islands that were erased and a Google Earth version of the same views.

As a result of the negative attention, Enbridge responded yesterday afternoon by partially altering the ads and stating to the media that the video was meant to be "illustrative" and that other videos, and their regulatory filings, contained accurate maps.

"I thought it was important to set the record straight", said Waters. "It's not acceptable to make a misleading video and then hide behind a claim that it's just an illustration, or that the map is not to scale. The rest of the coastline is drawn fairly accurately - they've just deliberately eliminated all the islands. Frankly, it's ridiculous that Enbridge is now suggesting that the viewer should scramble around and look at documents they've filed in a government registry or in other videos to find a true picture, when the most prominent image that they've provided is false. The fact is that the illustration is deceptive and that's why I'm asking for a formal investigation."

The graphic was picked up by groups opposed to the tar sands development project and rapidly went viral. SumOfUs, a world-wide, citizen-driven campaign organization dedicated to watchdogging corporate practices, posted the graphic online with a petition to Enbridge asking them to take the videos down from their website. As of this morning, over 12,000 people had signed the petition in about 12 hours.

This comes on the heels of a steady stream of strikes against the Northern Gateway pipeline, including a report by the US National Transportation and Safety Board calling Enbridge the "Keystone Kops" of pipeline safety, for their bungling response to the leak in the Kalamazoo River wetlands. More recently, Opposition Leader Thomas Mulcair said the pipeline is "a non-starter". Naturally, Mulcair takes the politically safer (i.e. spineless) route and supports the tarsands generally, but suggests the oil be refined in Canada.

The petition to "tell Enbridge to pull its misleading ads" is here.

This excellent video gives a simple, visual explanation of the insanity of the pipeline and the extent of Enbridge's lies.
Posted by laura k at 8/20/2012 05:00:00 AM