The drive from Mississauga to Quebec was long but easy. My only concern was winter storms, and we saw nothing more than the occasional flurry. In fact, for the portion of the trip in daylight, it was bright and sunny. I love long road trips; Allan gets cranky near the end, but 10 hours in a car, who can blame him.

As you drive through the gate into Vieux-Quebec, you're immediately struck by the difference, and the beauty. As everyone says, it's like suddenly being in Europe. Especially coming from the land of strip malls and townhouses, it's almost hard to believe we're in the same country. 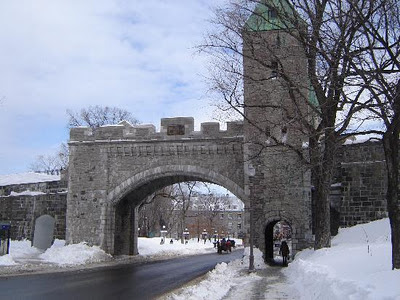 The B&B Chez Hubert is in Latin Quartier, on a beautiful historic street. As we drove up, a horse and carriage were clip-clopping by, and whole scene fringed in snow. It was picture-perfect.

Our room is small and perfectly comfortable. It's supposed to have a view of the Chateau Frontenac, and if you look from just the right angle, over the rooftops, you can see the top of that famous hotel. Not exactly as advertised, but that's OK. In European style, the bathroom is next door. The B&B has only three guest rooms, with a big, beautiful dining room and a common living room area (which we can't use, because the house has two cats, and I'm allergic.)

We got settled quickly, changed our clothes and went out for a celebratory drink. It was snowing lightly, but not very cold, and the night air was so refreshing. We had a glass of red wine at a bar, and the bartender treated us to something he called "hot shots" - shots of Galleano with a tiny bit of coffee and a wisp of cream.

He was overly talkative, telling us his life story - born in El Salvador, family emigrated to Winnipeg, settled in Quebec - but luckily for us we were hungry and had to go off in search of food. A chain restaurant was one of the few things open. We shared a good pizza and drank more red wine. (Why is it chain restaurants that you don't know are more appealing?)

As usual, many people told us that the people in Quebec would be rude and unfriendly and snap at us for not speaking French. And as usual, those people were dead wrong. People are as friendly and welcoming as people everywhere, perhaps more so, because they know you are on vacation and want you to enjoy yourself. We always say "Bonjour," and without fail whoever we're speaking to - whether in a restaurant, store, museum, hotel or anywhere else - switches to English. And not unkindly, not smugly, not with attitude, but with graciousness. Naturally, anyone in any service industry is bilingual. And contrary to what you will hear, they don't pretend to not speak English, and are not reluctant to do so.

Where does the stereotype come from? Why do so many Americans and anglophone Canadians say that francophones are unfriendly and rude? I used to think it was The Ugly American talking, the person who shouts at Europeans in English and is rude and exasperated because they aren't obeying quickly enough. But now Canadians are telling us the same thing. And they are Canadians who would be having the same sort of interactions as we're having - the kind one has on holidays. So why do we continually find Quebecers as friendly and welcoming as, say, Newfoundlanders were when we were there, yet other people tell us that Quebecers are rude and hate tourists? A mystery.

This morning we had a huge, sumptuous breakfast, way more than we needed, including homemade almond French toast beautifully presented with powdered sugar and fruit. The host pointed out the Maple syrup, and honestly, despite living in Canada for six years, I forget that maple syrup will be real here, not that fake sugar-water stuff. Allan, being from Vermont, always expects maple syrup to be maple syrup.

The forecast called for a warm day, between -1 and +2 C. Starting tonight, temperatures are expected to plunge, so it seemed like a good day to walk around. We hardly bundled up at all (and I was generally too warm the whole day), but I was very glad to have good hiking boots - slush and puddles abound. We loosely followed the walking tour from our Lonely Planet guidebook, seeing the city gates, City Hall, churches, convents, very old buildings now housing restaurants and hotels, and so on.

Vieux-Quebec is divided into old upper town and old lower town, a division that used to run along class lines. A strip of trendy and touristy shops on Rue de Petit-Champlain was once a notorious slum, while Notre Dame de Quebec and the Chateau Frontenac command the heights. The Chateau Frontenac is impressive from the outside, but if you've seen shopping on the ground floor of a large hotel... well, there it is.

The views from the Escalier Frontenac, which climb up to the Terrasse Dufferin, in front of the Chateau, are impressive, though. There's a beautiful view from the top of the Escalier Casse-Cous (Breakneck Stairs), looking down into Rue de Petit-Champlain, said to be the narrowest street in North America. (This claim is difficult to believe, as the oldest sections of old cities are full of tiny narrow streets. But hey.) In fact, there are beautiful views everywhere - old stone houses with painted trim, tucked into corners, lining narrow streets. There are art galleries and antique stores galore, and tons of tourist schlock, and some beautiful crafts. (Yes, I already bought earrings.) There are some cool trompe l'oiel murals, including a large, famous Fresque des Quebecois celebrating 400 years of Quebecois culture. 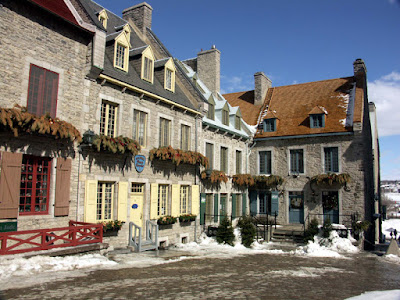 On the Rue de Petit-Champlain, we saw a sign on a building, announcing a historic home of Jean Demers, who we believe is an ancestor of Allan's! Here's something about the house. The Demers were one of the original French families to settle in this town; Allan is descended from them on his mother's side. (On his father's side, Woods came to the US before the Revolutionary War.)

Allan picked out a spot for lunch that we managed to find with the help of an bemused museum guide: Le Cafe du Monde. It's a local favourite, well off the tourist track, overlooking the St. Lawrence and straight out of Paris, down to the rattan chairs. The food was très authentique, and we had one of our favourite meals: a perfect Caesar salad (the real thing, with lardon, shaved Romano and the hint of anchovies), steak frites, red wine, creme brulee. And they let you have rare meat here. I remember thinking the same thing when we stayed at the Auberge Duchesnay five years ago: ahhh, people here know about food.

The staff could not have been nicer. We were seated at a table overlooking the frozen river, a beautiful spot, even in winter. Once again, after our first "bonjour" everyone spoke English, despite our attempts at French.

We ate a lot, drank a lot and were suddenly exhausted. And then had to walk uphill through the slush back to our hotel. Back at the room, we completely collapsed. Allan brought a tray of tea upstairs, and we're resting now.

It's supposed to be very cold tomorrow, so we're thinking museums and historic interpretative exhibits will do the trick. Tomorrow is our anniversary, although we may have had our anniversary dinner for lunch today.