infographic: the u.s. should be ashamed, but canada has little to brag about 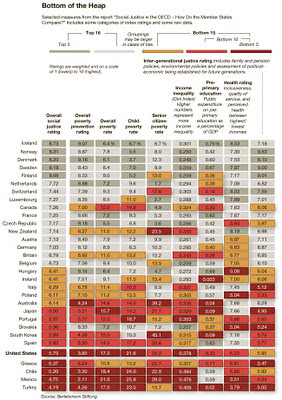 I found this telling infographic in a column by Charles Blow in the New York Times called "America's Exploding Pipe Dream". If you can't read it here, go here and click on the pop-up box.

We have not taken care of the least among us. We have allowed a revolting level of income inequality to develop. We have watched as millions of our fellow countrymen have fallen into poverty. And we have done a poor job of educating our children and now threaten to leave them a country that is a shell of its former self. We should be ashamed.

Poor policies and poor choices have led to exceedingly poor outcomes. Our societal chickens have come home to roost.

Blow reports on a study from a German foundation that analyzed some social metrics among countries that belong to the Organization for Economic Co-operation and Development (OECD).

As you can see, the US ranks very near the bottom of the heap. That's no surprise. What also shouldn't surprise - yet does, for many people - is Canada's pitiful scores. Look at the colour codes: Canada ranks in the bottom 15 on poverty prevention, and in the bottom 10 on child poverty and overall poverty.

You will often see Canadian statistics that show child poverty and overall poverty at much lower rates. Do you know why that is? Because they don't count First Nations. Canadian statistics are often re-configured to show aboriginal statistics separately, and aboriginal people in Canada have the highest poverty rates in the country, a legacy of displacement, cultural destruction and social exclusion.

This graphic shows that, as always, the Scandinavian countries lead the way. Europe is a mixed bag. It's better to be a child in Switzerland, but if you make it to your senior years, you do better in Canada.