you can look it up

"Can anyone on Capital [sic] Hill read?” demanded a sign held by a protester at one of the first Tea Party rallies, back in February of 2009.

"If so read the Constitution
As Americans we do not have the right:
To a house
To a car
To an education
Americans have a right
to per sue [sic] happiness
not to have it given to them!"

The sign intrigued me, and so I took a picture of it as its author held it aloft. Nobody’s entitled to the good things in life, her sign seemed to be saying, and so presumably we should stop crafting policy to make home ownership, travel, and education affordable — a curious demand in the middle of an economic catastrophe.

But I was also taken by the surface-level irony: accusing others of cultural illiteracy while herself apparently mixing up the Constitution with the Declaration of Independence, the document that actually mentions the “pursuit of happiness.” I filed it away and eventually forgot about it.

Until a year and a half later, when I was reading Spread THIS Wealth (And Pass THIS Ammunition!), a book by one C. Jesse Duke, a Tea Party enthusiast who has actually designed and copyrighted his own version of the movement’s familiar snake flag. Mr. Duke writes as follows:

Benjamin Franklin said, “The Constitution only gives people the right to pursue happiness. You have to catch it yourself.”

Here it was again, this time attributed to one of the few men who had a hand in drafting both the Declaration and the Constitution. Could Franklin really have got them confused?

I read on. After Mr. Duke’s next sentence — “By patronizing our fellow citizens under the guise of ‘helping’ them, we have taken away their fundamental dignity” — he included an endnote. I flipped to the back of the book and found this reference: “Proverbs 20:4.”

Now I was really intrigued. The wording of the quotation reminded me less of Franklin’s well-known style than of mid-twentieth-century self-help. “You have to catch it yourself,” I soon discovered, is an exceedingly popular bit of Frankliniana, complete with the awkward reference to the Constitution. It can be found on countless quote-compiling websites, the modern-day equivalent of Bartlett’s Familiar Quotations minus the fact-checking. Authors associated with the latest right-wing revival routinely attribute great significance to this quotation. Bloggers love it, especially those bloggers partial to a strict, no-welfare-allowed interpretation of the founding documents.

The saying crops up in all sorts of curious places. In 2003, the president of Stanford University used a version of it to welcome new students to the groves of academe. According to an article last summer in the Dallas Morning News, it adorns the office of the economic adviser to the prime minister of Georgia (the former Soviet republic, that is). Ann Landers quoted it in a 1992 column. Nowhere, though, could I find anyone who sourced the phrase back to a primary work by or about Benjamin Franklin. It does not appear in Bartlett’s itself. A search of the authoritative database of Franklin’s writings yields no matches. Google Books assures us it does not come up in any of the major Franklin biographies. I contacted six different Franklin authorities; none had ever heard of it. A search of scholarly journals turned up exactly one instance of the saying, in a 1960 issue of a magazine for high school English teachers — again, without the benefit of mooring to any primary works by or about Franklin.

Even the witty axioms of Benjamin Franklin fade to insignificance when a liberty-minded protester contemplates the mighty utterances of Thomas Jefferson, such as this one:

The issue today is the same as it has been throughout all history, whether man shall be allowed to govern himself or be ruled by a small elite.

It is a beloved saying. Someone has made a YouTube video in which a cartoon Founder recites the quote and then dares us modern-day slackers to do something about it. It has been incanted by Michael Steele, Lou Dobbs, and Christine O’Donnell, the former Senate candidate from Delaware, who deployed it to bolster the victimology that characterized her campaign: “That is the question, isn’t it?” she said in a speech last September, according to The New York Times. “And the verdict is in. The small elite don’t get it. They call us wacky, they call us wing-nuts. We call us, ‘We the people.’ ”

I was at first mystified by the right’s enthusiasm for this quotation. After all, the “small elite” that rules us was installed in its privilege by none other than conservatives themselves, who have done so much to make America a land where the voice of money outshouts everyone else. When the Tea Party faithful talk about the “elite,” however, they mean the exact opposite of that: they know that “elitism” is what happens when bureaucrats interfere with the natural, democratic, freemarket order of things, and therefore they find the maxim to be a stirring call to rise up against the lash of Boss Obama and his gang of unelected czars.

As with the Franklin quote, “ruled by a small elite” cannot be traced to an actual primary work by the sage of Monticello. The online Papers of Thomas Jefferson contain nothing. I consulted Jefferson scholars and the nice people at Monticello; none had heard it. Jefferson biographies: zip. I looked up elite in the Oxford English Dictionary and found that the word was first used this way in 1823, just three years before Jefferson’s death. An assistant editor of Jefferson’s papers at Princeton University told me that “as far as I can tell, TJ never used the word.”

This is excerpted from a terrific little piece in Harper's, several months back: "Check It Yourself," by Thomas Frank. Frank traces potential sources for both quotes, and speculates on this particular historical ignorance from a faction that claims to care deeply about history and returning the US to its roots. Interested readers may email me for a pdf.

I've looked everywhere for an image of the sign Frank quotes, but I can't find one. Instead, please enjoy these images. You've probably seen most or all of them before, but it never hurts to be reminded. And while it's true there's a wmtc house rule against correcting other people's spelling and grammar, that applies to otherwise civil and well-meaning commenters. Ignorant, racist neofascists funded by billionaires are fair game. 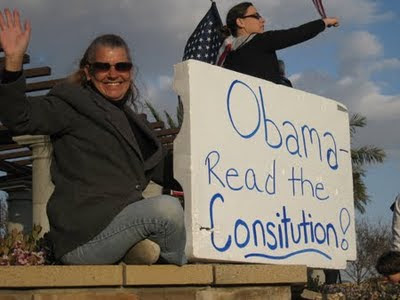 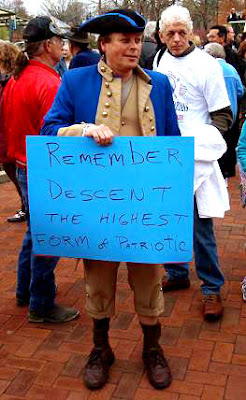 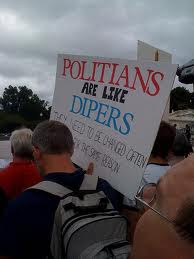 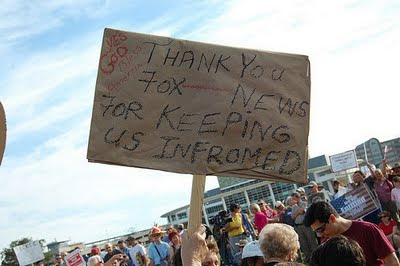 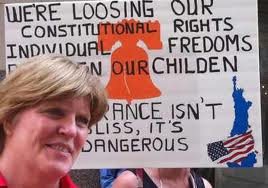 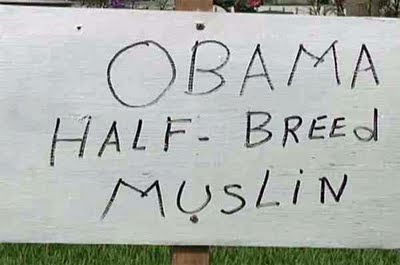 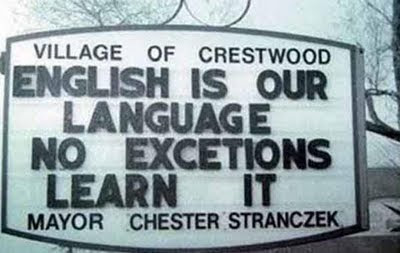 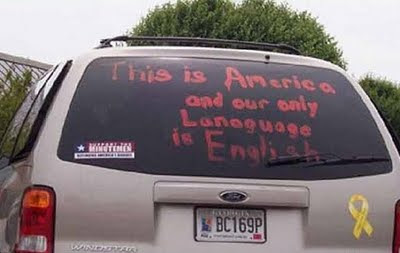 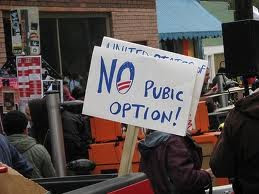 And for old-time's sake, the one and only, except no imatatons: 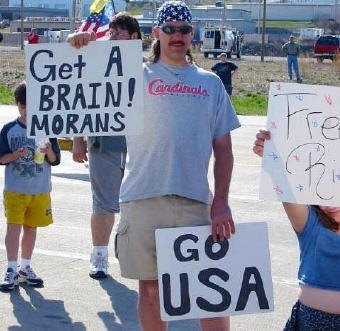 I'm laughing, but it's very, very sad. Ignorance plus anger is a dangerous combination. Throw in all those guns and their handlers' money and you have... That sentence is still up for grabs.
Posted by laura k at 8/21/2011 08:30:00 PM