quebec leads the way with resistance, in the halls of power and on the street 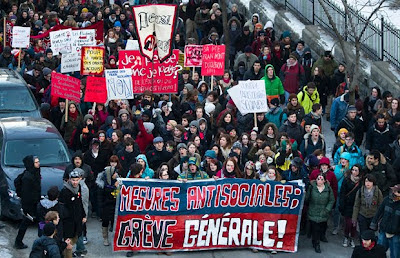 Two days ago, the Cons' ridiculously wasteful, unnecessary, and inhumane crime bill was passed in the House of Commons. The leadership of Quebec wasted no time in striking a blow for justice and common sense.

The province announced Tuesday that it would do everything in its power to limit the clout of the legislation that passed a day earlier.

Because the provinces are responsible for applying the laws passed in Ottawa, Quebec says it will work to soften Bill C-10 where possible.

The provincial minister said he will issue a directive to various players in the justice system to avoid applying the strictest provisions of the crime bill – particularly when it comes to youth offenders.

“It is not a plan to abolish C-10,” Jean-Marc Fournier told a news conference Tuesday inside a courtroom at Montreal's youth courthouse.

Some provinces, including Quebec, also say Ottawa should be responsible for paying for the new jail spaces that will be required as a result of the legislation. Quebec pegs the costs at $750-million for new prisons, and at up to $80 million a year for application of the new rules.

“It's not for Quebec to finance the costs of an initiative from a federal government that refused to collaborate with provinces on the content of the legislation,” he said. “The federal government can't hide its head in the sand and deny that some provinces will at least need to build more prisons, which takes time and money.”

Meanwhile, tens of thousands of post-secondary students in La Belle Province are on strike, protesting tuition fees increase and the austerity budget.

Austerity is about to descend on Ontario and on all of Canada, further cutting social services already weakened by past governments, both Conservative and Liberal, while corporate taxes are rolled back.