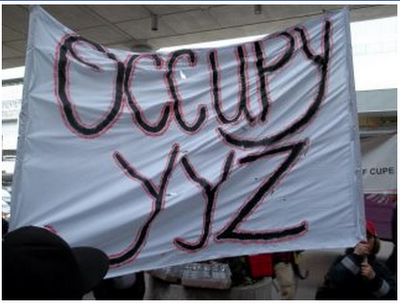 Three machinists, members of the International Association of Machinists and Aerospace Workers, were suspended after "sarcastically applauding" Minister of Labour Lisa Raitt as she walked to her flight. They may lose their jobs.

Now members of IAM at both Pearson and Trudeau Airports are on a wildcat strike, vowing to not work until their brothers are reinstated.

The Harper Government refused to intervene when Caterpillar - which received tax breaks and other incentives to come to Ontario - insulted its workers with a 50% pay cut, then closed its plant. But when workers have legitimate grievances against a company - and the company refuses to negotiate in good faith - the government forces them back to work. Now Air Canada has violated its employees' rights of freedom of expression, protecting the government that protected the company's interests. It's all very cozy for corporations and the governments that serve them.

I met a member of IAM recently; he came to Toronto to support striking library workers. That's how I learned that Air Canada just made a multi-million-dollar payout to its shareholders after selling off some subsidiaries. And the Air Canada workers are fighting for a 2% salary increase.

The photo at this link supposedly shows a man in Pearson Airport spitting in the face of a woman taking part in the job action. If this is true, this is beneath contempt, more disgusting than I can describe. These people need our support, and need it now.

Back-to-work legislation strips us of our basic labour rights, and these three men have lost their jobs for exercising their right of freedom of expression. Tell Air Canada to reinstate the three suspended workers!