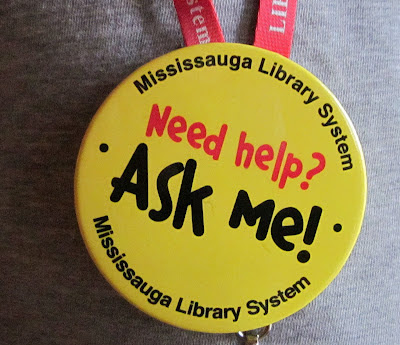 In at least one respect, I am a born librarian. Friends have said there should be a sign over my head: INFORMATION. Everywhere I go, people ask me for directions.

In New York City, it was a rare subway trip that I wasn't approached. "Does this train go to Grand Central?" "How do I get to Columbus Circle?" In Toronto, it's "Is this the way to the Eaton Centre?" and "Where is the Rogers Centre?" It happens just as frequently when I travel. We were in San Francisco less than an hour when I car pulled up beside me, passenger window rolled down, inquiring face at the window. In Italy, France and Ireland, natives and tourists alike asked me the way. On a deserted highway in rural Mississippi, in a tiny village upstate New York, in the middle of rush hour in Mexico City. They pick me out of crowds, cross the street, flag me down. They want directions, and they want them from me.

When I talk about this phenomenon, people think I'm exaggerating - until they spend time with me. Not long before I left New York, my friend NN I were doing errands on the Upper West Side when a woman stopped me: "Is there a crosstown bus on this street?" NN said, "I see you're still in demand."

I've thought about why this might be. I suppose, as a short woman, I don't appear threatening or intimidating. And perhaps a lifetime of urban living has given me an alert, confident look. The very first time I can remember being asked for directions may provide a clue. This was in university, on the first day of classes, freshman year. I was nervously rushing to class, wondering where on earth I was going and what on earth I was doing, when a young woman tapped my arm: "How do you get to College Hall?" I burst out laughing. "I have no idea! I'm a freshman!" Wow!" she said, impressed. "You really look like you know where you're going." Together, we held her map and tried to determine where we were. But it made my day. It made my month. Hey, I look like I know where I'm going.

It's a responsibility I take very seriously. If I don't have the requested information, I feel like I've let someone down. (Even worse is the occasional realization that I've given someone wrong directions.) I wait while people search for pens. If the person is interested, I'll give several alternatives. In New York I would always try to tailor my directions to their needs: Can they walk a long distance? Are they in a rush? Would they rather save the price of the subway, and see the city on foot? More than once, I told tourists that we were headed in the same direction, and took them myself. (I know this isn't that unusual. Many Canadian friends have told me New Yorkers did this for them. New Yorkers are great like that.)

Now, for the first time, I actually have that INFORMATION sign. I'm not yet authorized to match people with their information needs, the magic known as reference. But the questions pages are allowed to answer are called... directional. "Do you have any Geronimo Stilton?" "Where is Harry Potter?" "Where are the books about mummies?" Follow me.