what i'm reading: killers of the flower moon: the osage murders and the birth of the fbi 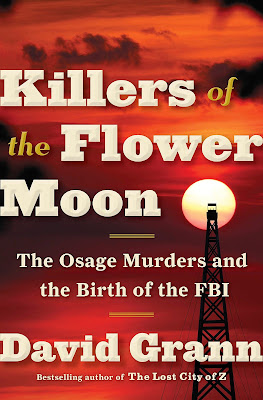 I'm sure many of you have read Killers of the Flower Moon: The Osage Murders and the Birth of the FBI by David Grann. It's an award-winning bestseller that garnered a lot of attention when it was published in 2017. If you haven't read it, get it from your library, or add to your Kindle, or run to your favourite local bookstore to pick it up. It is an excellent and very worthwhile read.

Killers of the Flower Moon is written like a cold-case murder mystery. Grann reveals the evidence both of long-ago murders and the detectives who sought to solve them, unwinding the many knots, false clues, and dead ends. It's exciting and suspenseful -- and when the case appears to be solved, the reader discovers  another, deeper level to the mystery.

Along the way, Grann reveals an Indigenous community that was devastated by settlers who regarded them as subhuman, and completely expendable. Lives were shattered -- from greed, from hatred, and from total disregard. It's safe to say that most readers who pick up this book have never heard of the Osage murders. The book is revelatory, yet in keeping with everything we know about the fates of Indigenous people in the Americas. The Osage murders were a modern version of Pizarro claiming Atahualpa's gold.

Killers of the Flower Moon is a fast-paced, accessible read -- gripping and compelling -- the kind of story that seems almost impossible to believe, and yet is thoroughly researched and documented. Truly excellent narrative nonfiction.