what i'm reading: say nothing: a true story of murder and memory in northern ireland 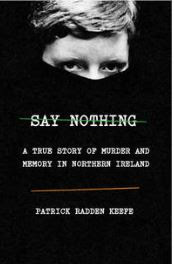 Say Nothing: A True Story of Murder and Memory in Northern Ireland is without a doubt one of the best nonfiction books I have ever read.

I'm in awe of Patrick Radden Keefe's ability to weave together so many disparate and often contradictory sources to re-create a story that is incredibly detailed and complex, yet fashion it into an addictive page-turner.

The book is loaded with vivid details and surprising revelations -- until the very end. A blend of true-crime, spy thriller, history, and incisive feature journalism, Say Nothing is a tour de force of narrative nonfiction.

Keefe uses a brutal and tragic incident that took place in Belfast in 1972 as a focal point to unpack and examine the Troubles. The Troubles is a euphemistically quaint and minimizing name for a complex and prolonged undeclared war. It was a war of violence and politics, language and identity, public relations and extreme secrecy.

I was obsessed with Ireland and Irish history for about 10 years. It started with this book in 1989 and was finally capped with our trip to Ireland in 2001.* But you don't need any particular interest in or knowledge of Ireland to follow Say Nothing. The bare facts will be adequate.**

Two elements of this book were especially compelling for me.

Say Nothing raises many questions about the use of violence in independence and liberation movements. It's easy to label a group that employs violence as terrorists. But what of the state government that employs the same methods, on a much larger scale? Can independence be won without violence? Has that ever happened? Modern western thought pretends that violence is never justified (except by states, for anything labelled national security) -- a view largely held by people privileged to never need it.

Another theme running through Say Nothing is the shapeshifting presence of Gerry Adams. How many people have been a high-ranking leader of a group labelled a terrorist organization, a peace broker, and a successful politician in the modern arena? One of the very few is Nelson Mandela. There are many parallels, and I suspect if one read a true account of the ANC, their work and methods were not all that different than the IRA's. Yet Mandela is revered as a freedom fighter and Gerry Adams -- well, it depends what side you're on. A terrorist, a politician, a great leader, a lying scumbag? I highly doubt readers of Say Nothing will come away with an impression of Adams as a Mandela-like figure. But he is undoubtedly a fascinating figure.

Don't worry about any of these things. Just read this book. If you enjoy great nonfiction, you will love this.

I've now put Patrick Radden Keefe's most recent book, Empire of Pain: The Secret History of the Sackler Dynasty, on my to-read list.

* When I was planning our trip to Ireland, and especially while we were there, people constantly asked if I have Irish ancestry. I do not. I've never been asked this regarding any other travel, including to countries that have seen substantial emigration to the United States, such as Italy. It's as if people don't conceive of Ireland as a place folks might just want to visit, without a motive.

It's a beautiful country, and we had an awesome trip. We saw natural wonders, history, Neolithic passage tombs and stone circles. We heard traditional music every night in beautiful small-town pubs, where folks would sometimes erupt in spontaneous song. From the ruins of a ring fort, we watched a border collie herd cows. In Dublin we saw a Brian Friel play and hung out with James Joyce's nephew. I fell in love with Murphy's. History was everywhere. Also rainbows.

** Here's more than you need to know.

150 years of struggle for independence culminates in the Revolutionary Period (1912-1922), most famously including the Easter Rising of 1916.

1919-1922 Irish War of Independence, Irish Civil War: Irish Republic Army (IRA) vs Britain Army and Royal Ulster Constabulary (RUC) (called something else at first, but this is the name normally used). This maps roughly as Catholic vs. Protestant, but only roughly, as some key Irish independence leaders were also Protestant.

The war ended with the hated partition of Ireland into two separate countries.

The Free State, later the Republic of Ireland, or simply Ireland, is most of the island, to the south.

North Ireland comprises the six northern counties, and is part of the United Kingdom -- i.e. part of Britain. It is majority Protestant. There was a long history of discrimination and persecution of the Catholic minority.

People who fight for a united Ireland are known as republicans. They are largely, although not exclusively, Catholics.

People who want Northern Ireland to remain part of Britain are known as loyalists or unionists. They are largely Protestants.

Republicans fought a guerrilla war to attempt to expel the occupying British from Northern Ireland. Loyalists, British Army, and the police force sought to eradicate them. This period, known as the Troubles, lasted from the late 1960s until 1998.

I agree - this is an excellent book.

The illumination of the shape shifter-in-chief was most enlightening.

I grew up in England whilst this was going on.
So obviously my perspective is coloured by that.
I never really had much to say about it at the time as my opinion would have got me in serious trouble.
My best friend in my teenage years is an Irish Catholic and we never ever spoke about it.
I had a conversation with an American friend ( also a Catholic ) and we both felt within 50 years Ireland will be united again.
I hope so.

I forgot add in my previous comment that Patrick Radden Keefe is now very much on my radar.

Now I'm very curious to know about the opinions that would have gotten you in serious trouble in those days.

The book ends with some ideas on the possibility of a united Ireland on the horizon. Also of the impact of Brexit on the divided/united Ireland.

I can sum it up in one word.
LEAVE.
People bang on about ' sovereignty ' and then out the other side of their mouth say the exact opposite.
I grew up near a big military town and there was serious anti-Irish sentiment.
I'd always thought that how would English people feel if Kent , Sussex and Hampshire were part of France and the same things happened there as in Ireland.
Ahh Brexit , I've heard some drivel about that I can tell you.

Yes. LEAVE. That's really all there is to it. Like they left India and South Africa and wherever the hell else.

Longtime reader/occasional commenter. :) I read this book when it first came out and it was the best I read that year. Just amazing how he wove all the story lines together and followed all those pepole over 50 years. I still think about it and recommend it to people all the time. Glad you enjoyed it too! "Empire of Pain" is also on my to-read list.

Loribeth, thank you for your thoughts!

I'm thinking you must comment under a different name, because I usually remember every commenter. No need to explain or out yourself. :)

When Laura first mentioned this book, I said I know that guy! He did a fantastic podcast called "Winds of Change". Back in 1990, the Berlin Wall had come down, the Soviet Union was about to crumble, and the Scorpions (a West German heavy metal band) had a huge hit with a power ballad called "Wind of Change". It was unlike any song the band had previously recorded and it became associated with the political events in Europe. Years later, Keefe hears what seems to be a well-sourced rumour: the Scorpions' song was actually written by the CIA! The rumour nags at Keefe's brain for a decade before he finally tries to find the truth. His eight-part investigation is here.

Another book to add to my Kindle list and another country to add to my bucket list (although I've actually wanted to go to Ireland for a long time). Thanks!

Allan ,
When I first read your comment about the CIA writing Winds Of Change , I couldn't believe it.
However , if the FBI investigated The Kingsmen's version of Louie Louie for some time due to the lyrics ( all they had to do was listen to Richard Berry's original ).
Then anything is possible.
I look forward to listening to the podcast.
Nice one.
Thanks