what i'm reading: sometimes you have to lie: the life and times of louise fitzhugh, renegade author of harriet the spy 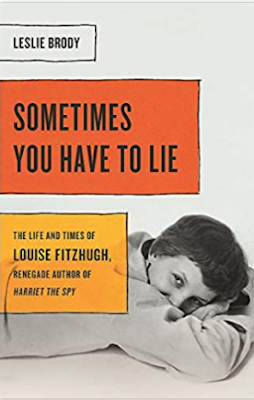 Until very recently, I didn't know anything about Louise Fitzhugh and had not thought about her at all.
Of course, as a child I read and loved Harriet the Spy, Fitzhugh's iconic and groundbreaking children's book. For a good portion of my life, I dreamed of writing a similar book. Many years ago, when I started writing serial fiction for a children's magazine, I bought a handful of tween books to re-read, and Harriet was among them. But I knew nothing about its author.
On my birthday last year, my book-loving partner surprised me with a copy of Sometimes You Have to Lie: the Life and Times of Louise Fitzhugh, Renegade Author of 'Harriet the Spy'. This was a thoughtful addition to my biography reading list.
It was an inspired gift: the book turned out to be fascinating! Louise Fitzhugh's life was very interesting, and author Leslie Brody digs deep into the historical context, revealing several hidden histories along the way.
Louise Fitzhugh was principally a visual artist, and she wrote several other books. But the most noteworthy parts of her "life and times" are Fitzhugh's original family background, a window into lesbian history, and a capsule history of children's literature and publishing.
Fitzhugh's parents had been a golden couple; their wedding was the social event of their Southern town. But when the relationship soured, and Fitzhugh's mother sought a divorce, the father used his privilege and power to destroy his ex-wife. The local newspaper (which he owned) and the all-male court proceedings conspired to gaslight Fitzhugh's mother and strip her of custody of her infant daughter. Louise, raised by her paternal grandmother and an African American servant, was told that her mother was dead.
When Louise's father remarried, her smart stepmother knew that young Louise needed to know the truth sooner rather than later. Imagine learning that your mother, who you thought was dead, lived in your town! Later, when Louise got her first job with the local newspaper and spent time in the "morgue" (newspaper archives), she learned the public version of the story for the first time.
Brody tells this story with both great compassion and the proper social context: how a wealthy, white patriarch used the system that was designed by and for others like him, to discredit and destroy a woman who got in his way.
Fitzhugh was queer -- and out. She lived as a couple with several different women during her lifetime, and was part of a very lively lesbian social scene, made up of professional women, mostly (but not only) in the arts and/or entertainment fields. Sometimes You Have to Lie is a window into this rich subculture, which thrived in bars and beach houses throughout New York City and The Hamptons. 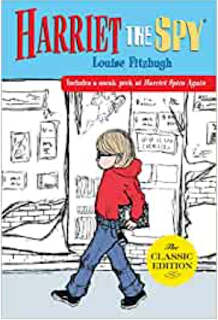 Published in 1964, Harriet the Spy was a groundbreaking work, part of the vanguard of a sea change in children's literature. Where most children's literature had been written for parents, full of moralizing and no shortage of condescension, the new kid-lit spoke to children with respect, and reflected the realities of their children's lives. Sometimes You Have to Lie situates Harriet in that context, and offers a mini-history of children's publishing.
To a lesser extent, but still present in the book, there is also the context of the civil rights movement and the escalating war in Vietnam. This isn't discussed in detail, but it is part of the backdrop of Louise Fitzhugh's life and her motivations. Ending both segregation and the war were important to Fitzhugh, and both figure into her life and art.
Sometimes You Have to Lie: the Life and Times of Louise Fitzhugh, Renegade Author of 'Harriet the Spy'  is a fast, lively, and enjoyable read, great for anyone who loves history, has an interest in LGBT history, loves children's books, or just loves a well-crafted biography.
Posted by laura k at 4/25/2021 06:09:00 AM