what i'm reading: janis, her life and music 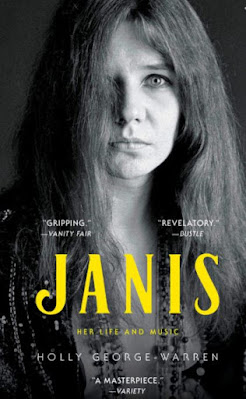 As a teenager and in my early 20s, I was somewhat obsessed with Janis Joplin. I read all the available biographies of her, and took any opportunity to see footage of her legendary performances.

I never lost my fascination; I've continued to love Janis' music throughout my life. Reading Janis: Her Life and Music by Holly George-Warren deepened my appreciation of Janis' intelligence and artistry. The book also shifted my adult view of Janis, from a misunderstood, tragic figure, to a joyful, life-affirming woman intent on living life on her own terms.

George-Warren was the first Janis biographer to have full access to all her diaries, journals, and letters, and truly, the first to care about facts. I didn't realize that Myra Friedman, author of the famous Janis biography Buried Alive (which I read and re-read) was in fact a publicist for Janis' record label. Turns out the book was mostly myth and rumour.

Of course it is tragic that Janis died at only 27 years of age, by an accidental heroin overdose. She had been working hard to get clean, then relapsed, unknowingly injecting heroin that was 40 or 50% pure, rather than the 10% that was typical. An early death is a terrible thing, and when an artist has only begun to scratch the surface of her talents, it's also a tragic loss for music and culture. But Janis' life was anything but sad or tragic, and George-Warren's book reminded me of that. Janis' had her challenges, but her story is joyous and triumphant.

Without a doubt, Janis was insecure and had a profound need for attention. She went through some very severe bouts of depression, and was prone to fear and anxiety. She didn't love herself as she should have. With her personal evolution cut short at age 27, she had little time to do the hard work of adult self-acceptance.

Janis clearly sought to numb her pain with alcohol and drugs. With her addictive personality, this was a lethal combination. She was first addicted to shooting speed (what is now called crystal meth), later to heroin, and always, from start to finish, to alcohol.

Janis was very intelligent, loved to read, and never traveled without a big stack of books. She was a self-taught music scholar. In her youngest musical days, she discovered the blues, listening to and teaching herself all the old blues forms. Bessie Smith, Empress of the Blues, became her first musical idol, and she taught herself to emulate this great artist who died six years before she was born.

Later, after seeing Otis Redding perform in San Francisco, Janis saw her own potential in his style, and sought to emulate him -- as Robert Plant and other singers would later do with her.

Janis was always keenly aware of her musical influences, always seeking to honour rather than co-opt them. When adapting signature songs by Willie Mae "Big Mama" Thornton, Sister Rosetta Tharpe, and Etta James, Janis asked permission, and always acknowledged the originators onstage. She always cared deeply that she was standing on big musical shoulders.

Here's something I never knew: the main reason Janis was hated and ostracized in her hometown of Port Arthur, Texas, wasn't her original clothing or her wild hair or her singing. She was many years away from developing her signature style. It was all racism: Janis was hated because she was friends with Black people.

Janis frequented segregated bars on both sides of the divide, seeking music to hear, learn, and perform. She didn't hide the fact that she had Black friends; she regarded the racist norms as stupid and small-minded, and she wasn't shy about saying so. There may have been others in the small Texas town that opposed segregation, but no one else was open about it.

In Buried Alive, Friedman hints at Janis' pan-sexuality, and her relationships with women. I don't know if Friedman thought she was protecting Janis' reputation, but George-Warren finds a woman who was openly bisexual, who had both fleeting and serious relationships with both men and women.

Other writers have seen tragedy and dysfunction in Janis' very active sex life, but I see a woman with exuberant appetites, who lived by her own rules. Janis was very serious about her music, and she was also serious about enjoying life. She worked hard and she played hard.

Janis' overactive sex life is served up as evidence of a troubled, lonely soul. Did anyone say that about Mick Jagger (or Leonard Cohen, for that matter)? This is just the old double-standard, the same one that Joni Mitchell was subjected to, the one that all women are subject to, especially those who live and love independently. Janis did want someone to love, and she had serious, loving relationships with both men and women, but she also wanted to fuck around as much as she wanted. This wasn't sad! It was joyful and life-affirming. Janis was so alive to life and to possibilities. She loved intensely -- she loved sex -- and she loved being wild and free.

Janis also loved trying new things musically. When her talent outgrew her first band, Big Brother and the Holding Company, everyone around her urged Janis to dump them and move on. But the members of that band were more than friends, they were a family. Breaking with them meant losing love; it meant choosing her art over love. It was necessary, but it was very painful.

Janis craved attention, craved the spotlight, whether on a tiny stage in a coffee house or in an arena; the more attention, the better. And of course that is also a drug. With fame comes fans' expectations, while an artist still wants to grow and change musically. The attention quickly becomes a prison, choking the life out of creativity. Janis: Her Life and Music is excellent at showing how popular success becomes a death sentence for music.

This book is also full of wonderful insider stories of other musicians' and artists' encounters with Janis, and great quotes from critics discovering her incredible talent for the first time. Here are a few small samples.

From one of her band members on her interpretation of the Gershwin classic "Summertime":

It was as if molten lead had been poured into the rather conventional form of the song. Her voice was so high in emotional content that it split into two lines, one modal line accompanying the other at an exotic distance we felt rather than heard.

From the infamous Ralph Gleason, who booked Janis and Big Brother at the famous Monterey Jazz Festival.

There she was, this freaky-looking white kid from Texas onstage with all the hierarchy of the traditional blues world, facing an audience that was steeped in blues tradition, which was older than her ordinary audience and which had a built-in tendency to regard electric music as the enemy. The first thing she did was to say, 'shit', and that endeared her right away. Then she stomped her foot and shook her hair and started to scream. They held still for a couple of seconds, but here and there in the great sunlit arena, longhairs started getting up and out into the aisles and stomping along with the band. By the end of the first number, the arena was packed with people writhing and twisting and snaking along. It was an incredible sight. Nothing like it had ever happened before in the festival's ten years. It was Janis's day, no doubt about it. Old and young, long hair or short, black or white, they reacted like somebody had stuck a hot wire in their ass.

As fine as the whole evening was, it belonged mostly to sparky, spunky Miss Joplin. There are few voices of such power, flexibility and virtuosity in pop music anywhere. Occasionally Miss Joplin appeared to be hitting two harmonizing notes at once. Her voice shouted with ecstasy or anger one minute, trailed off into coquettish curlicues the next. It glided from soprano highs to chesty alto lows. . . . In an unaccompanied section of "Love Is Like a Ball and Chain," Miss Joplin went on a flight that alternately suggested a violin cadenza and the climax of a flamenco session. In "Light Is Faster Than Sound" and "Down on Me," she unleashed more energy than most singers bring to a whole program.

For Janis fans, this book is a gift.

For anyone who enjoys reading about the roots of rock of the 1950s and 60s, the music of the 1960s, and the San Francisco scene of that era, this is a must-read.

For those who only know the Janis Joplin of her one radio hit (albeit an incredible song), do some Googling and some listening. Then read this book.