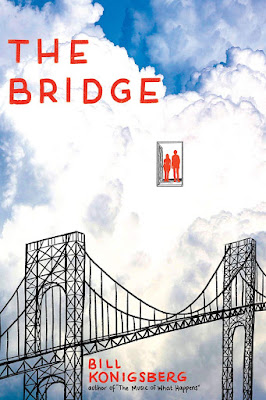 The Bridge, by Bill Konigsberg, is the best YA novel I've read since Eleanor & Park in 2012.

Unfortunately, I know that many readers won't go near this book, because of its subject matter: teen suicide. This would be a terrible missed opportunity. It's a great book that both teens and adults -- especially adults who have contact with teenagers -- should read. Yes, it's sad, but it's also hopeful, and it's powerful, and it's necessary.

Konigsberg, author of several excellent YA books, approaches the subject with a brilliant twist that makes the whole book work. Two teenagers stand on New York City's George Washington Bridge, feeling suicidal. They don't know each other; their presence on the bridge at the same moment is a coincidence, a quirk of fate, if you will.

The story unfolds four times. She jumps, he doesn't. He jumps, she doesn't. They both jump. Neither jumps. Each timeline explores the ripple effect of each choice.

Through this device, Konigsberg avoids many pitfalls that other books about teenage suicide have suffered from, accused of either glorifying suicide, or over-simplifying it, or blaming others, or making it situational, without examining mental health.

This is also just a really good book. The writing is brilliant, the characters are fully realized -- including the adults, which is rare for this genre. The sadness is leavened with humour and with hope. The story takes place in New York City, in a privileged world which, in reality, is not an easy world for children.

The book is also notable for what it's not. It's not glib or facile. There are no quick fixes. But there are pathways that may lead to better mental health. There are options.

I find it sad and frustrating that so many people will not read The Bridge. They'll say: "It's too sad." "I don't want to think about that." "I read for enjoyment, and that's not an enjoyable topic."

I've heard this about many books that explore painful and upsetting themes. It's a shame, because a book like The Bridge is an opportunity to understand others more deeply, to see people and their choices in a more nuanced way, even to think about how we can try to help.

I probably should have more empathy for people's reading choices, but... I don't. If you read this book, will parts be sad and painful? Obviously, yes. Will you cry? Probably. And what of it? You'll feel something. You won't melt. You won't break.

Millions of lives have been touched by suicide. Mine has been; yours probably has been, too. The ripple effect explored in The Bridge is happening all the time. For me, a book like this is a way to understand this better, perhaps to bear witness, from a respectful distance.

For some people, the topic of the book will be too close. It reflects their own reality, and they may not be in a place where they can absorb the story. I get that. But to people who insist that every read be sunny and cheerful, perhaps try moving outside your comfort zone. It's worth it.

Reading The Bridge made me remember -- many times -- one of my favourite monologues from the series "The Blacklist", spoken (of course) by the character Raymond Reddington (James Spader).

Have you ever seen the aftermath of a suicide bombing? I have. June 29th, 2003. I was meeting two associates at the Marauch restaurant in Tel Aviv. As my car was pulling up, a 20 year-old Palestinian named Ghazi Safar detonated a vest wired with C4.

The shock wave knocked me flat, blew out my eardrums. The smoke…it was like being underwater. I went inside. A nightmare. Blood, parts of people. You could tell where Safar was standing when the vest blew. It was like a perfect circle of death. There was almost nothing left of the people closest to him. 17 dead, 45 injured. Blown to pieces. The closer they were to the bomber, the more horrific the effect.

Sounds well worth reading. And unlike my taste in movies and television, I am find with reading books with sad or disturbing themes. In fact, most of the novels I read are not what I'd call uplifting.

I remember Reddington's monologue. I instantly found it offensive. While I agree that his description of suicide's ripple effect is poignant and accurate, and clearly all around us every day are people who have had to process the fact that someone they knew took their own life, but referring to suicide as "an act of terror" against everyone around you?

That is all wrong. So killing yourself (or threatening to) is terrorizing your family and friends, as opposed to evidence of how much pain someone must have been in or a desperate plea for help? And the people closest to the suicide are the ones that suffer "the most pain, the most damage". Really? More pain than the person who became convinced that dying was the only way to make the unrelenting pain come to an end? "Why would you do that?" He's making this person's death all about HIM. Why would you do this thing that causes ME so much pain? Can't you think of someone besides yourself?

That makes me bristle like when someone says suicide is a cowardly act. Fuck that. You don't know what kind of act it is, because chances are you have never been in that spot. And I don't know either, but I know it's not cowardly or "the easy way out". No one tearfully talks about killing themselves for two years, but doesn't do it because they sadly realize they aren't enough of a coward yet.

Amy, I'm glad you may read it. If you do, please let me know what you think.

Allan, I 100% agree re "cowardly". I don't even understand the concept. And I can definitely understand hearing the Reddington monologue that way.

I hear those last questions as a plea to someone who is suicidal, to think of the effect their act will have on a loved one, because maybe -- just maybe -- that is a reason to hang on. And even if you hang on for someone else, you're still alive, so there is still hope.

That is definitely one theme of The Bridge. Think of your mother/little sister/best friend/whoever. Your act will destroy their world. If you don't care about yourself and you think you are not worthy to live, you won't stay alive for yourself, but maybe you will for them. In that moment, before the act, maybe that thought will keep you alive.

I also agree that so often, so many people, frame a suicide in very selfish terms, without acknowledging the pain the suicided person must have been in. I considered quoting the monologue without the last lines, ending it on "the most damage".

But on the other hand, loss and pain are selfish -- our own pain (physical or emotional) is all about us. Someone who is left in the wreckage of a figurative suicide bomb is entitled to think about their own pain.

One reason I am adding this to my reading list is that just this week a young man (42) from our community, a man our daughter knew in high school, committed suicide. He'd been troubled (drugs) in high school, so may have long been struggling. But it was a shock to us. And I can't begin to imagine how his parents and his brother must be feeling.

Even when it's not a surprise, it's a shock.

I question how capable a person is to consider anyone else when they are close to killing themselves. We may be thinking of the entire scope of the act and its effects, but we are doing so with a non-suicidal mind. I assume what is in their head is so all-consuming that nothing else can penetrate, no matter how much it might mean to them otherwise.

That may be true.

On the other hand, people who have survived suicide attempts or have "suicidal ideation" -- think about it but don't go through with it -- have been stopped by thoughts of others. That's what the studies show.

It might depend on how strong their bonds with others are. And who knows what else.