#climatestrike vs my brain: i am struggling with pessimism and hopelessness 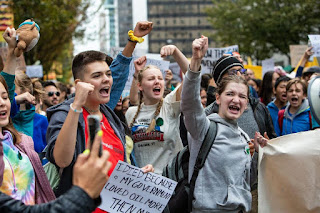 I started writing this post in September, after the global Climate Strike.

It was exciting to see that so many people -- millions around the globe -- understand the urgency and are willing to take to the streets. I thought, This is beautiful! This is amazing! ... and This won't change anything. Both at the same time.

I hate writing that. I hate feeling this way.

Along with Climate Strike, there are other positive developments -- extinction rebellion, for example, and an increasing number of civil disobedience arrests, both celebrity and ordinary. This will grow. More people will get involved and actions will become even bolder. 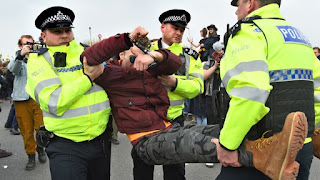 Yet I feel utterly pessimistic about humanity's future. I have lost hope.

Of course I know I'm not alone in that. Anyone who looks at the reality of climate change either cloaks themselves in denial, clings to shreds of hope, or vows to fight on without hope.

For me, this hopelessness is a kind of identity issue. I reflect on my own feelings and think, Is this me?

I've been an activist all my life. Integral to that has been a bedrock belief in the collective power of people's movements to change the world. I don't consider myself an idealist. I focus on the points in history where people's movements have produced change. And they are legion. Activism has re-made the world again and again. I know that, I still believe it, on a local or national level.

But when it comes to climate change, the threat to our entire planet and our species, I don't believe it. And that shakes me.

I still want us to fight, of course. We must fight. We have no choice.

But there is only one real solution to climate change, and that is abolishing capitalism. And to call that a pipe dream is an understatement on the grandest level. The corporatocracy is powerful beyond all measure. The ruling class will stop at nothing to retain profit and privilege.

Google "ways to stop climate change," and you'll find lists of ways to reduce your carbon footprint -- the usual suspects. All good, all completely inadequate, all deflecting attention away from the real issue, that a system predicated on so-called "growth" is unsustainable. That capitalism is destroying our planet and killing our future.

Even environmental groups that understand the need for collective, political action, such as (in Canada) the David Suzuki Foundation, fall well short of the mark. "Unite for bold climate action." "Get politically active and vote."

All around me good-hearted people are working hard to reduce their individual footprints, and working on the local level to do whatever they can. That's all good. Less plastic waste and less mindless consumerism are worthy goals. But while we're carrying our reusable shopping bags and not using straws, on the largest scale, it only gets worse.

My comrades talk about a socialist revolution. But revolution is infinitely more likely to bring some form of authoritarianism -- whether theocracy or military state -- than anything else. 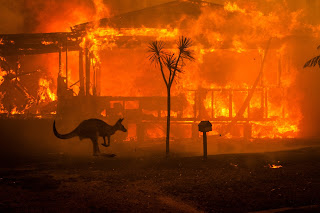 The impossible economics of late-stage capitalism, have (predictably) given rise to a resurgence of xenophobia and fascism. As our world is (literally) burning with the need for cooperative, equitable, sustainable solutions, the ruling class doubles down on the unsustainable, unjust system that brought us to this dangerous place.

All I can do at this point is quote Gandhi: You may never know what results come of your actions, but if you do nothing, there will be no results.