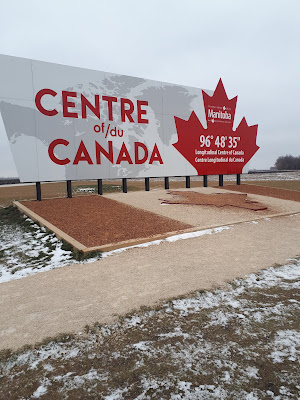 We are finally out of Ontario! We had a lovely and eventful day -- including a visit with a friend and a wolf sighting!

We got up and ready very early this morning, thanks to some insomnia on my part. Too much salt plus vodka before bed equals Laura doesn't sleep well. It's not like I don't know that. I just sometimes lack the discipline to do what I should.

It was decidedly less freezing today, with a low of only -10 C and a high of +2. I scouted out a spot for breakfast, about an hour down the road (the TCH) in the town of Dryden. Allan got us tea and coffee and muffins so my head wouldn't explode during that hour. The local chain is Robin's Donuts. We saw them all through northern Ontario, too. The muffins are really dense and seem to be whole grain. The glazed donuts give you a toothache just by looking at them. I'm not into donuts, so I can't tell you how they compare to Tim's or Krispy Kremes.

Right before we left Ignace, Allan remembered that Diego had been looking for something under the bed. He brought the flashlight in from the car... and found "planet" -- Tala's favourite comfort toy. Diego has inherited it, but during Tala's lifetime, he was not allowed to play with it. We would have been heartsick to realize it was gone.

In Dryden, the Patricia Inn Family Restaurant served a terrific diner breakfast, with a choice of home fries (cubed) or hash browns (shredded) potatoes, and fantastic omelets, plus friendly servers. These diners all have desserts that have gone out of fashion elsewhere. I may just have to have some lemon meringue pie before this trip is done.

After breakfast, we were motoring down the highway, still hilly and wooded at that point. As we came down a hill, I saw an animal loping across the road. I thought it was a coyote, but as we slowed down and got closer, I thought... could that be a wolf? It crossed the highway and then continued down a slope. As we drove by, I got a very clear look at its face: it was a Grey Wolf. My heart soared. If you read wmtc, you may know I am fascinated by wolves -- by all wild canids, but especially wolves, the most majestic animals on earth, the princes of nature. I've seen wolves in wolf centres, but the chances of spotting one by chance in North America is very slim. I was thrilled.

We started listening to an audiobook today. I normally can't do audio -- I can't concentrate -- but I thought I would try again on this trip, choosing something a little less challenging. I've been reading Donald Westlake's Dortmunder novels, comic crime capers that are so funny and entertaining. Allan also loves Westlake -- he reads the Parker novels -- so this is something we would both enjoy. I found two Dortmunders on audio. We also have a podcast Allan wants to hear, and a CBC radio documentary about George Orwell. I'm finding I can mostly listen to the book, but only as a passenger. I can't really drive and listen at the same time. I'm not sure this is going to work. But we'll keep trying.

We soon crossed into Manitoba; neither of us has been in this province before. Almost immediately, the terrain flattened and the road straightened. You can see forever.

One time when we stopped for Diego, Allan came hurrying back to the car to get the camera. When he returned, he told me there was a carcass of a deer in the woods, partially eaten. He saw clumps of hair from a deer all along the embankment, so we speculated that the animal may have been hit by a vehicle, then dragged into the woods by enterprising coyotes.

Our friend in Winnipeg texted us a link to the marker for the longitudinal centre of Canada. We stopped for a couple of pictures. As you can see, I'm not attempting a photo journal of our trip, but this was just too good to pass up.

Soon after that, we ran into M and the truck at a gas stop. He asked if we had pulled off the road to see a dead animal! Maybe our car is bugged.

In Winnipeg, we found our way to a Tim Hortons, and met J and J there. I know J through the War Resisters Support Campaign. They are both Quakers, and have lived on Vancouver Island, among other places. I learned that one of the Js is originally from the US, and emigrated to Canada the same time we did. It was wonderful to see them -- really a highlight of the trip. Plus they gave us a big batch of homemade cookies. (I know there's a lot of food in these posts!)

After Winnipeg, we continued down the highway two more hours to the town of Brandon. I fell asleep during a chapter of Dortmunder. (I wasn't driving!)

In Brandon, we're at another Super 8, this one crazy inexpensive and quite nice. Once we got Diego situated, we went next door to a Smitty's for dinner, this time with M. Smitty's is something like a less obnoxious Denny's. I had a cobb salad and my daily glass of red wine.

Today we did 670 kilometres, down from yesterday's peak of 706. From now on, we'll have a little less driving every day -- but that's deceptive, as one leg is through the mountains.

Labels: moving to bc, personal, travels