selling vinyl in the gta? go to volver for honesty, integrity, and maximum cash

In July, I wrote that we planned to get rid of our LP collection. Well, the deed is done. We turned this 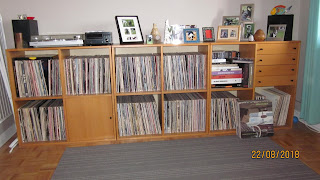 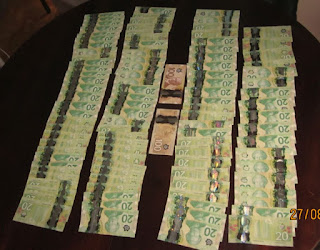 We got much more money than we expected, thanks to the honesty and integrity of Lincoln Stewart.

For the most part, the business of buying used LPs and CDs is a bit shady, a half-step up from a scam. When Allan was a music critic, we used to trade CDs for cash on a regular basis. We got those CDs for free and they meant nothing to us, so whatever the buyer -- the owner of the used record store -- wanted to give us was free money. The buyer would make a few piles, and say, "Five dollars each for these, three dollars for these, and a buck apiece for these." It was a take-it-or-leave-it proposition. We never knew what they would sell the CDs for.

With our LPs, it was very different. This was a personal collection, built over time, mostly music we cared about. Allan didn't want to sell them for pennies. There was also the physical work of selling them -- boxing them up, loading them into our little car, and driving around to used music stores was not very appealing!

Then I found Volver, run by Lincoln Stewart. Here's Lincoln in his own words.

I'm the former manager of Vortex Records and the former owner of Good Music, two much-loved and well-respected Toronto record stores. Both establishments had sterling reputations for fairness and quality. Vortex was the most highly-thought-of used record store in Toronto for almost 40 years, with The Toronto Star calling us "an oasis for music lovers," and more than a dozen "Best Record Store" wins and nominations in the city's newspapers' annual "People's Choice Awards" (Now Magazine, Eye Magazine, The Grid, etc.).

I now buy and sell top-shelf used records (and other things) out of my Dundas West loft. (Don't let the lack of a storefront scare you -- it's by choice, having sold the entire inventory of Good Music to a competitor and entering semi-retirement in 2016 at age 48.)

My motto is Quality records bought and sold. Fair prices in and out. That means I'm not trying to screw you. I pay half of what I intend to sell a record for. Period. If I'm gonna sell it for $20, I'll pay you $10. If I think I can sell your record for $50, that's $25 in your wallet. It's that simple. Unlike some of my competitors, I do not advertise that I "pay up to 60%" and then pay you good money for two records and pennies for everything else. If I want the record -- and admittedly, I'm very picky -- I'll pay you 50%. Doesn't matter if it's a $75 record or a $750 record. No exceptions.

And here's where it gets really interesting.

Importantly, I don't expect you to be the expert. Maybe you don't know you've got an $80 record. I'll tell you -- when I offer you $40. I have bought and sold vinyl in Toronto since 2005. It's what I do. Over the years, the stores I've run have paid out over a million dollars for people's used music and movies. I've bought from those who've inherited records they know absolutely nothing about and I've bought from the most informed record collectors in the city -- and every type of seller in between. Everyone gets treated the same way and I have the testimonials to back that up.

Most important to me is my reputation: the amount I offer a for a record is based solely on that record's resale value to me, not on how much profit I can make on the title. This policy is the direct opposite of many of my competitors who want to pay as little as possible and sell for as much as possible.

Here's what happened. Lincoln came to our apartment. Each album that he was interested in, he took out of its sleeve to inspect it. Some figures he double-checked on his laptop, using databases that catalogue used records sales all over the world. (Who knew?) He added up what he would sell the albums for, offered us a price, and offered to show us exactly how each album was valued.

I was amazed to learn that we owned several LPs that were actually considered valuable! Their re-sale value had nothing to do with the music itself, but was based on the scarcity of a particular pressing. The top-earning LP was a pressing of some promotional Metallica album that we didn't even know we had, worth $185.

I remember as a teenager hearing kids brag about having an album worth some outlandish sum of money, and I always thought they were bullshitting -- which I'm sure they were. But I didn't realize there actually are albums worth thousands, rare pressings of jazz and blues (and some rock) that collectors all over the world search for.

I found the process fascinating, and asked Lincoln lots of questions, which he was happy to answer. Lincoln is a very nice guy with an interesting background, and a great deal of musical knowledge -- plus a nice dog. He arrived when he said he would, brought his own canvas bags to transport the LPs, and was very organized and efficient. When Diego wouldn't leave him alone, Lincoln asked, "Would it help if I gave him my undivided attention for five minutes?" then gave Diego a huge amount of love and attention. We were very impressed! (Diego loved it, but it didn't help; we had to give him a time-out in the bedroom.)

To me, the Volver 50% guarantee is fair for both parties, buyer and seller. Every day, Lincoln sends a message to his list of interested buyers with a small selection of choice LPs and prices. People come to his Toronto loft and buy them for the advertised price. All sales are in person -- no shipping -- and there's no haggling. You know I like that!

So how did we do?

Lincoln was interested in about 300 LPs, and offered us $1860. (See first round, above.) He also gave us some tips on who might buy the remainder of the collection, and how much we should expect to get for it -- very valuable information.

Shortly after, Lincoln learned about another sales opportunity, so he was interested in buying the rest of our collection himself, and offered us another $400. All told, we traded our LPs for $2260.

Allan held back a small pile of LPs that have particular value to him. It turned out one of them, based on the colour of the label, is worth $150. Allan declined. I was very impressed -- and slightly annoyed.

Last week, during the Springsteen on Broadway show, I suddenly had a pang of loss, thinking of my copy of "Born to Run," with its iconic cover art. A foundational album for me, music that moves me more than I can express. But I have the album on CD, and there's no shortage of ways to see the cover images and more from the same shoot. I can live with that.

So. We earned a pile of cash. We lightened our load. It required minimal effort. It was fair to both buyer and seller. And now other people will have the opportunity to enjoy those LPs. All in all, a very good deal.