I see by the wmtc tag "graphic novels" that I intended to write about graphic books I read and enjoyed...and I see by the scant number of posts with that tag that I have not been doing so! The last wmtc post tagged for graphic novels is from four years ago, almost to the day. 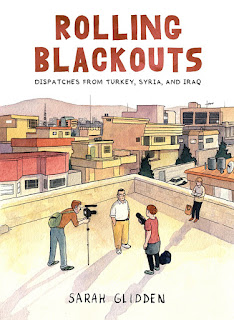 In any event, I want to tell you about a graphic book I just finished and really enjoyed: Sarah Glidden's Rolling Blackouts: Dispatches from Turkey, Syria, and Iraq.

In 2010, Glidden traveled with three friends who had journalism visas to the three countries in the book's title. Two of the three were part of a nonprofit, progressive media collective; the third was a former US Marine who served in the Iraq War, and was a childhood friend of one of the journalists.

Glidden doesn't merely report on what they found -- which would be interesting in itself. She stands outside the frame, as it were, and writes about their process and all its implications -- the ethics of their interviews, the industry constraints, the impossible dilemmas, the necessary compromises. The weighty responsibility of telling other people's stories, how stories are shaped into narratives, and how narratives influence our perception -- these questions are contemplated, explored, and challenged, as the inside view of how journalism happens is revealed to the reader. The question at the heart of Rolling Blackouts is "What is journalism?".

Dan, the ex-military friend on the trip, has a strange -- and often unwelcome -- perspective on the invasion of Iraq. From a privileged, middle-class background, with no family history of military service, he was an unusual enlistee. What's more, Dan insists that he was opposed to the invasion and actually protested against the war, but enlisted so he could improve the outcome. (Seriously?) He also insists that he has suffered no ill effects from his participation in the war, despite losing four friends. The journalists' attempts to mine and disrupt his odd perspective forms one of the recurring themes of the book. 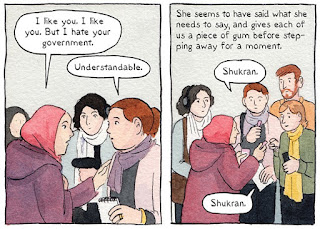 But Rolling Blackouts is definitely not self-absorbed navel-gazing. We meet Kurdish Iraqis whose lives were improved by the removal of Saddam Hussein, and we meet Iraqi refugees living in Syria, whose lives, and the lives of their children, and generations to come, were destroyed by the US invasion. There is an Iraqi man who has been deported from the US, separated from his young family, because he was -- perhaps falsely -- accused of connections to terrorism. There's a young Iranian couple, both artists, on the brink of resettling in Seattle. There's a United Nations refugee administrator, an Iraqi taxi driver, a "fixer" who helps introduce the crew to potential interview subjects, and many other encounters. To each story, Glidden brings compassion and empathy, and an insistence on nuance in a world that is seldom black and white.

I really enjoyed Glidden's illustrations, soft watercolour snapshots of tiny moments in time, the kind that our memories are made of. The compassion and empathy with which Glidden approaches her subjects is evident in her lovely art. I also loved and appreciated the book's simple and extremely readable font. I wish more graphic book creators would think about the accessibility of their typeface choices. I understand that fonts are art, but when typeface impedes access, something has gone awry.