Two new books about Joni Mitchell have come out, with -- strangely -- the same title. 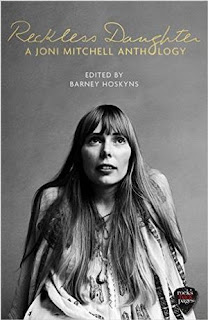 Reckless Daughter: A Joni Mitchell Anthology, edited by Barney Hoskyns, is a collection of stories about Joni* and reviews of her work. It's part of an ongoing collection called Rock's Backpages, which looks at rock through accomplished music writers of the last 50 years. I'm reading this now.
Reckless Daughter: A Portrait of Joni Mitchell, by David Yaffe, is a biography of the artist and her music. It's especially noteworthy because of the unusual access Yaffe had to his subject. I'm going to read this after I finish the anthology.
While reading reviews and impressions of Joni's earliest performances and recordings, I realized how long it's been since I've heard her early music. In some cases, at least her first two albums, I probably have never played as an adult! I decided I would listen to all her albums in chronological order, starting from the beginning. I'm going to try to write about the listening experience on wmtc. 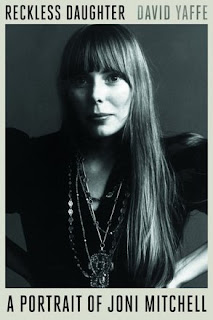 I don't know how this will go. I don't think I have anything particularly insightful or interesting to say about these albums, and I've never been able to write very well about music.

My response to music is very emotional -- not intellectual, not analytical, and not verbal. My love for Joni Mitchell and her place in my consciousness is intense -- profound -- and thus very difficult to articulate.

But if I'm going on this musical journey, wmtc is coming with me.
Your comments, as always, will be very welcome.
* I normally hate when female artists and athletes are referred to by their first names, often in contexts where men are referred to by their last names. But to her legion of devoted fans, Joni is Joni.
Posted by laura k at 11/03/2017 03:31:00 PM