I recently had a very positive experience with anti-anxiety medication, and realized I should share it here.

I've written many times about the wonders of modern medicine for treating depression and anxiety, and the life-changing, relationship-saving, and quite possibly life-saving effects of using the right medication. While these drugs may be sometimes prescribed unnecessarily, I believe they are under used -- that many more people could be helped by these meds, if their own biases didn't stand in the way, and if everyone had equal access to healthcare.

My mega-wrap-up of my perspective is here: in defense of drugs: anti-depressant medication saves and improves lives. 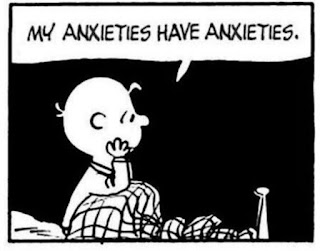 I've had a prescription for an as-needed anti-anxiety medication for many, many years. In the past, I used them very infrequently, less than once a month, and sometimes only a few times a year.

Two years ago, I had a sharp uptick in anxiety, and realized I should be taking the meds more often. When I asked my doctor for a refill, she expressed concern about the frequency of use, and suggested I use an SSRI instead -- that is, she wanted me to use something daily, rather than as-needed.

I was pretty resistant to the idea -- which is interesting, given everything I've said and written about this! I already take several medications, and I just didn't want to believe that I needed another. I let it go for a while, but when I needed yet another refill, my doctor was more insistent.

She explained to me things I knew but had conveniently forgotten. Drugs like clonazepam are very habit-forming. The body builds up a tolerance very quickly, so that it takes increasingly higher dosages to achieve the same results. After a time, your brain "forgets" how to feel normal without the medication. There has been substance abuse in my family, especially around prescription painkillers and sleeping pills, and I have struggled with my own addictive personality as well. So what was I doing?

That was all I needed. I decided to try one.

Wow! I could not believe how much better I felt. I discovered that I had been experiencing anxiety almost all the time. I had become so accustomed to it, that it felt normal to me. I only recognized the anxiety when it spiked, when it felt like an anxiety "attack".

I felt calm, clear-headed, and in control. I was suddenly able to look at my to-do lists and my crowded calendar without panic -- and without the not-quite-panic-but-something-approaching-panic that I usually experienced.

This has led to greater focus, and to greater enjoyment of my jobs. I can think more clearly. I can understand -- finally -- that my life is within my capabilities. I can get it done.

I don't know if there's been an external manifestation of this or not. I have no idea if I seemed anxious and now seem different, or if the whole time it has been internal only. I only talk about my health issues to a few people. This is not because I fear stigma or negative reaction, but because I prefer to de-emphasize it for myself. I do not want to identify with an illness; I find this an important part of maintaining good mental health. (I mean this with no judgment of anyone who does otherwise. There's no one-size-fits-all.)

Coming home from our recent trip to Egypt and Jordan was a big test of this new-found calm. I knew I had a ton of work waiting for me, both library and union, including some Big Things I had been preparing for before we left. In the past, I would have felt a lot of anxiety, beginning the day before we headed home. Once home, I would be in a state of semi-panic, trying to plow through all the work at once, moving as fast as possible, as if it all had to be done immediately.

This time: none of that. Anxiety was a place in the distance. I could see it, I was aware of its presence, but could simply choose not to visit it. Clear-headed, calm, getting things done.

One more thing. When I was looking for an image for this post, I saw a lot of the mini-posters you see on Facebook, supposedly articulating what anxiety feels like. I didn't relate to any of them. None of them described how I feel. Don't know why that is.
Posted by laura k at 3/06/2017 04:41:00 AM