what i'm reading: this changes everything by naomi klein, one of the most important books you'll ever read 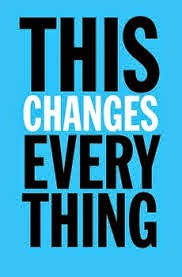 This Changes Everything: Capitalism vs. the Climate, by Naomi Klein, is incredibly difficult to write about. I've been putting sticky notes beside important paragraphs as I read, and my copy now looks like an art project, bristling with coloured paper squares. I can say without exaggeration that this is one of the most important books you'll ever read.

In her clear, readable prose, Klein demonstrates exactly what is destroying our planet: unregulated, unchecked capitalism, brought to you by the scourge of our era: neoliberalism. (US readers may be more familiar with the term neoconservatism.)

In her 2007 book The Shock Doctrine, Klein showed us how corporate interests exploit crises to enact policies that enrich a small elite, using the holy trinity of neoliberalism: privatization of the public sphere, deregulation of the corporate sector, and lower corporate taxation, paid for with cuts to public spending. Now Klein widens her lens to demonstrate how that same orientation actively prevents us from taking the necessary steps to halt and reverse climate change, and with it, the impending destruction of a habitable Earth.

Klein succinctly and precisely diagnoses the root problem. In order to challenge climate change, in order to reverse a course that threatens billions of lives and is ultimately suicidal for humanity, radical change is required. We must stop living as if infinite growth is possible on a finite planet. This goes way beyond separating our trash into different bins and using more efficient light bulbs. It means dismantling the fossil-fuel industry, powering our entire society with renewable energy sources (it is possible!), and ultimately, abandoning the idea of growth as the basis for our economies.

A belief system that vilifies collective action and declares war on all corporate regulation and all things public simply cannot be reconciled with a problem that demands collective action on an unprecedented scale and a dramatic reining in of the market forces that are largely responsible for creating and deepening the crisis.

This means rethinking the false notion of "free" trade. Ontario, for example, would be decades ahead in wind and solar production, not to mention good, green jobs, but for the crippling mandates of free-trade agreements. "Free" deserves scare quotes.

Not only do fossil fuel companies receive $775 billion to $1 trillion in annual global subsidies, but they pay nothing for the privilege of treating our shared atmosphere as a free waste dump.

Klein reminds us that if free-trade regulations block our ability to disrupt our dependence on fossil fuels, then those regulations must be rewritten. And so it goes for any number of policies that express the neoliberal ideology, which, as Klein writes, "form a ideological wall that has blocked a serious response to climate change for decades."

Of course, nothing is free; the question is who pays the price. The price may be unemployment, or jobs that can't sustain a decent life, or overcrowded classrooms, or a generation condemned to poverty-stricken old age. The price may be flammable drinking water, or whole villages beset by rare cancers. The neoliberal agenda wreaks its havoc in ways seen and unseen. Shell's Arctic oil rig ran aground when it braved impassable winter weather, attempting to beat a timeline that would trigger additional taxes. In Montreal, the MM&A rail company received government permission to cut the number of staff on its trains from five to a single engineer: thus the Lac-Megantic disaster. However measured, it's a price paid by ordinary people, while corporations wallow in profit.

In turn, dismantling neoliberalism would mean rethinking our governments, too, as democracies driven by lobbyists, corporate donors, and industry interests - valuing profits over people - pave the way for policies that are killing us all. Can a society where this can happen be rightly considered democratic?

...the most jarring part of the grassroots anti-extraction uprising has been the rude realization that most communities do appear to lack this power; that outside forces - a far-off central government, working hand-in-glove with transnational companies - are simply imposing enormous health and safety risks on residents, even when that means overturning local laws. Fracking, tar sands pipelines, coal trains, and export terminals are being proposed in many parts of the world where clear majorities of the population has made its opposition unmistakable, at the ballot box, through official consultation processes, and in the streets.

And yet consent seems beside the point. Again and again, after failing to persuade communities that these projects are in their genuine best interest, governments are teaming up with corporate players to roll over the opposition, using a combination of physical violence and draconian legal tools reclassifying peaceful activists as terrorists.

....Only two out of the over one thousand people who spoke at the panel's community hearings in British Columbia supported the project. One poll showed that 80 percent of the province's residents opposed having more oil tankers along their marine-rich coastline. That a supposedly impartial review body could rule in favor of the pipeline in the face of this kind of overwhelming opposition was seen by many in Canada as clear evidence of a serious underlying crisis, one far more about money and power than the environment.

When reviewing the proposed solutions to climate change, Klein skewers the chimeras that don't and can't work, from the corporate boondoggle known as cap-and-trade, to various technological fixes that would take our fantasy of controlling nature to bizarre new heights.

Indeed, if geoengineering has anything going for it, it is that it slots perfectly into our most hackneyed cultural narrative, the one in which so many of us have been indoctrinated by organized religion and the rest of us have absorbed from pretty much every Hollywood action movie ever made. It's the one that tells us that, at the very last minute, some of us (the ones that matter) are going to be saved. And since our secular religion is technology, it won't be god that saves us but Bill Gates and his gang of super-geniuses at Intellectual Ventures.

Klein also heaps contempt on the so-called partnerships between large environmental organizations and the fossil-fuel industry, which are something like the partnership between the pig and Oscar Mayer. As Klein puts it, "the 'market-based' climate solutions favored by so many large foundations and adopted by many greens have provided an invaluable service to the fossil fuel sector as a whole."

This Changes Everything illuminates an impressive array of activism, introducing most readers, I'm guessing, to a new expression: Blockadia. Blockadia represents the global, grassroots, broad-based networks of resistance to high-risk extreme extraction. From Greece to the Amazon to New Zealand to Montana to British Columbia, the resistance is in motion. Taking many forms - the divestment movement pressuring institutions to sever economic ties with the fossil-fuel industry, the towns declaring themselves "fracking free zones", the civil disobedience that physically slows the building of pipelines while court challenges continue - Blockadia is creating space for public debate and the possibility of change.

In many places, Blockadia is led by people from indigenous communities. Not only are indigenous peoples often the first victims of climate destruction - witness, for example, the off-the-chart cancer rates of First Nations people living downstream from Canada's tar sands - but their worldviews may form the basis of our way forward. On a Montana reservation where young Cheyenne are learning how to install solar energy systems - cutting residents' utility bills by 90% while learning a trade, creating an alternative to a life spent working for the coal industry - a female student makes this observation:

I despair. But it doesn't matter.

I want everyone to read this book, and because of that, I hesitate to share this unfortunate truth: ultimately, This Changes Everything filled me with hopelessness and despair. I wouldn't say it made me pessimistic, as I am optimistic about humankind's ability to change ourselves and our systems, if we choose to. Rather, the book filled me with outright hopelessness, because I don't believe we will even have the opportunity to make that choice. The forces aligned against the necessary changes are massive, and massively powerful. Untold profits depend on the system not changing, and what's more, gargantuan profits are being reaped off the destruction itself. The oligarchs who profit from climate change are associated with the most powerful tools of violence ever known - the mightiest armies and the greatest amorality.

Adding to the difficulty, our society clings to what Klein calls "the fetish of centrism": of the appearance of reasonableness, of "splitting the difference, and generally not getting overly excited about anything". This is the illogic that dictates we must "balance" the interests of the petroleum industry with our need for clean water, or the profits of real estate developers with the human need for shelter. This fetish of centrism allows the government and its partners in the media to label as "extremists" people who want to protect water and land from catastrophic oil spills.

Added to this, huge numbers of ordinary people, led by corporate media and astroturf faux activists, align themselves against their own interests, stoked by fears of imagined foes (be they communists, immigrants, or feminists) and cling to notions of a supposedly free market, which in reality is heavily subsidized by taxpayers. This global market is anything but free: the risk is socialized in every way possible, but the returns are strictly privatized.

If you've read Jared Diamond's Collapse, you are familiar with the concept that societies don't always do what's best for them. Societies make choices that ultimately chart their own demise. I do not despair of our ability to remake our world, but I know that the forces aligned against us will stop at nothing to prevent us from doing so. The most powerful people on the planet can shield themselves from the effects of climate change until it is too late for the rest of us.

And yet... and yet. I feel hopeless, my feelings don't matter.

What matters is this: we have little time, and we must try. Resistance movements have changed cultures. Resistance movements have brought mighty empires to their knees, have ended deeply entrenched systems: slavery, colonialism, apartheid. For centuries, there was something called the Divine Right of Kings, a concept which must have seemed permanent and immutable. Now it does not exist. Capitalism, as currently practiced, is killing our planet - killing us. We cannot shrug our shoulders.