the decision "you'll regret for the rest of your life": the reality gap in fictional abortions

The conversation around the movie "Obvious Child" has prompted me to re-visit a long-standing interest of mine, one I share with many other reproductive rights activists: the portrayal of abortion in the mainstream media.

I haven't seen "Obvious Child" (I wait for DVD or Netflix, as always), but I've heard that it includes a rarity: an honest and positive portrayal of the choice to terminate a pregnancy. Considering how many women do have abortions - and considering that the choice is usually met with relief and happiness - this shouldn't be exceptional. Yet it is.

On fictional TV shows and movies, when women are faced with unwanted pregnancies, certain outcomes are almost predictable. Sometimes abortion is never mentioned as an option, as if it simply does not exist. More often, abortion is mentioned briefly, contemplated with horror, and cast aside.

In soaps, a spontaneous abortion (usually known by the antiquated term miscarriage) often settles the question. Horseback riding is good for this, as is a fall down a flight of steps. Somehow no bones are broken but the pregnancy disappears. In movies, women who find themselves unexpectedly pregnant often contemplate abortion, can't go through with it, and are converted into happy motherhood. "Save the Date" is a good recent example of this, although the ambiguous ending leaves the happy outcome to the viewer's imagination.

And there's the question of what happens after abortion is chosen. Depression, and death by either murder or suicide, or general psychotic outbursts, are not uncommon.

Advancing New Standards in Reproductive Health - a project of the University of California, San Francisco - looked at every single instance of abortion in fictional movies and TV shows, and compared them to reality. They're still working on the project, but you can click here to see an infographic of their results so far. Such as this. 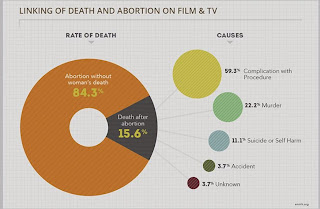 I don't know if most producers and screenwriters know this is twaddle but fear the reprisals of anti-choice activism, or if living in a world of media fiction has misled them to actually believe this stuff. Or perhaps they are simply creating drama, the way TV detective mysteries have practically invented the psychotic female murderer. (Yes, they exist, but they're relatively rare. Except on TV.) Either way, abortions in movies and TV often end up tinged with anti-abortion propaganda.

In reality, the most common feeling for women to experience post-abortion is relief. It's over, and she can move on with her life.

This is not to say there isn't, for some women, sadness or wistfulness or some measure of regret. Sometimes no choice is really what you want. I've known women - and perhaps you have, too, or perhaps this has been your experience - who would have liked to have another child, but knew that in good conscience they could not. Either she couldn't afford another child, or her life was too unstable, or her marriage was breaking up, or what have you. She thought it would be wonderful to have another baby, but not now, not given her current circumstances. So she chose abortion, all the while wishing she didn't have to. So there's a measure of regret, but the choice is freely made.

Often, though, there is only relief, pure and simple. An unwanted pregnancy is a horrific experience. The bottom drops out of your world until it's taken care of.

But don't take my word for it. How can we be sure that an exception like "Obvious Child" is actually a more honest portrayal? From every study that's ever been done.

The Guttmacher Institute compared women's emotions one week after terminating a pregnancy to the emotions of women who were denied abortions.

Context: The notion that abortion causes poor mental health has gained traction, even though it is not supported by research. Few studies have comprehensively investigated women's postabortion emotions.

Methods: Baseline data from a longitudinal study of women seeking abortion at 30 U.S. facilities between 2008 and 2010 were used to examine emotions among 843 women who received an abortion just prior to the facility's gestational age limit, were denied an abortion because they presented just beyond the gestational limit or obtained a first-trimester abortion. ...

Conclusions: Difficulty with the abortion decision and the degree to which the pregnancy had been planned were most important for women's postabortion emotional state. Experiencing negative emotions postabortion is different from believing that abortion was not the right decision.

(This research is incorrectly credited to the University of California San Francisco, in many online stories.)

A similar study by the Academy of Medical Royal Colleges in the UK reviewed all studies about the emotional effects of abortion that had been published in English between 1990 and 2011.

- Unwanted pregnancy increases a woman’s risk of problems with her mental health.

- A woman with an unwanted pregnancy is as likely to have mental health problems from abortion as she is from giving birth.

Of course, in terms of reproductive and human rights, it doesn't matter if a woman regrets having an abortion. Human beings must own their own bodies, and must be free to decide whether, if, and when to bear children. Like all life decisions, reproductive decisions come with a risk of regret. As free people, that's our risk and our potential consequence to bear. When it comes to bringing a life into the world, I know I'd rather regret not having a baby than regret having one. Most of all, though, I insist on having the choice.