youth books, children's book edition #10, and the best part of my job

I thought readers' advisory was the best part of my job, but that was before I began running our library's teen book club.

Once a month, I spend an evening with a group of teens who choose to spend their evening at the library, talking about books. We hang out, eat snacks, talk about books, talk about life. Although I've never had an interest in book clubs for myself, facilitating these young people's enjoyment of reading is a joy and a privilege.

The teens themselves come from diverse backgrounds and experiences. Most are the first generation of their family born in Canada. Some lead pressured, overly scheduled lives. Others are relatively independent and mature. Some are bursting with ideas and enthusiasm. Some are quiet and speak very little. All of them listen respectfully to each other and encourage each other. This is what I love best. Always, they are kind to each other.

I've read that reading helps people develop empathy and compassion, that readers exhibit a higher degree of empathy than non-readers. I don't know if these teens are such nice people because they read, or if they read because they're nice people, or if it's just a random coincidence. But on the last Monday of every month, these kids make me love my job even more.

TBC is also an opportunity for me to venture out of my reading comfort zone and try books I wouldn't normally pick up.

Many TBC members, including me, thought they wouldn't enjoy Cinder, a dystopian-future take on the Cinderella fairytale, by Marissa Meyer. We all ended up tearing through it, cheering for the strong, independent, but damaged main character, hanging on suspense and plot twists, and not guessing the ending. 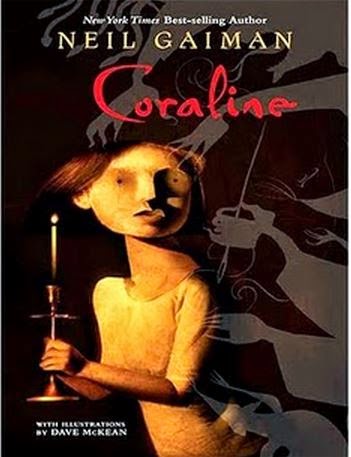 TBC gave me an excuse to read Coraline, Neil Gaiman's modern classic children's horror novel. I normally don't read horror, and I really had no idea what constituted horror for children. Coraline seems like just the right amount of scary for kids - and me! It's creepy and shivery, in a way that makes you want to keep reading, not in a way that gives you nightmares.

Gaiman follows some standard children's-lit conventions - the child of absent or neglectful parents as a solo adventurer, forced to rescue herself and others from the clutches of something evil - but energizes them with lyrical language and unexpected twists. One member of TBC shares my avoidance of all things scary, so I'm looking forward to seeing what she thought.

Other upcoming TBC selections: The Maze Runner by James Dashner (which I wrote about here), It's Kind of a Funny Story by Ned Vizzini (here), Epic by Conor Kostick, the first book of the favourite adventure series of one of our members, Hate List by Jennifer Brown, and Gauntlgrym by R. A. Salvatore. At our next meeting, we're voting by secret ballot for the last two titles of the year.
Posted by laura k at 4/20/2014 07:00:00 AM