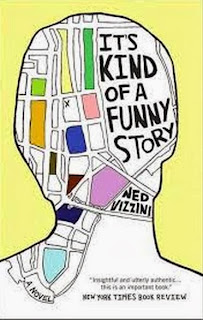 It's so hard to talk when you want to kill yourself.

That's the first line of Ned Vizzini's excellent 2006 youth novel, It's Kind of a Funny Story. By the time I read the book this year, the author was already dead. Vizzini committed suicide last December; he was only 32 years old.

Those facts alone are tragic. But now that I've read this book, I find Vizzini's death even sadder. On some level, I chide myself for that: every person's life is of equal value, and every early death is a loss. But we feel the way we feel, and Vizzini's suicide feels, to me, inexpressibly sad, a monumental loss.

Vizzini wrote youth fiction in a natural, straightforward voice, with deep insight and wry humour. It's Kind of a Funny Story is a slightly fictionalized account of the onset of the author's depression as a teenager, and the five days he spent in the psychiatric unit of a hospital in Brooklyn, New York. It's a funny book, often poignant, sometimes very moving, always very honest. It's an excellent book, and was made into a very good movie in 2010.

Vizzini's work touched the lives of millions of young people. We can be sure that untold numbers of teens and young adults with depression recognized themselves in Craig Gilner, the intrepid narrator of It's Kind of a Funny Story, who is trying to save his own life, trying to believe that his life is worth saving.

Vizzini was a very talented writer, and was hugely successful. He found the kind of success as a youth author that I used to dream of - that I worked very hard for, but did not achieve. It's easy to speculate that Vizzini's early success contributed to his depression, but I think those easy answers are just as easily wrong. He was depressed. He sought help, he got help, but eventually his depression overwhelmed him. This happens to successful people, and it happens to people whose depression prevents them from ever achieving success. It happens to talented people, and it happens to ordinary people. For every Ned Vizzini, David Foster Wallace, and Anthony Lukas who kill themselves, there are thousands more, whose names we never know.

Suicide is called many things: cowardly, selfish, crazy. I find all of these judgements strange, and wrong. One of my little missions is, when I hear or read someone speaking ignorantly about suicide, to  always counter with a more compassionate perspective. Empathy really shouldn't be too difficult: imagine being in so much pain that death seems like the only option.

There is another thing about suicide: shame. In most western countries, suicide is among the three leading causes of death of people between the ages of 15 and 44, and the second leading cause of death between ages 10 and 24. And these figures do not include suicide attempts, which are much more frequent. (Figures from WHO and NIMH.) Most of those deaths also represent survivors: the loved ones left behind. I know many people whose lives have been touched by suicide, including my own and my partner's. Yet it's still rarely spoken of. Many families still change the cause of death in obituaries and fabricate stories for family history. Attitudes about mental illness have changed and are changing, but the stigma associated with suicide speaks to how much work remains.

I wish Ned Vizzini was still here to write more great teen novels, or to do whatever else he wanted. I hope his work has made life a little more bearable for some of his readers.
Posted by laura k at 3/09/2014 06:00:00 AM