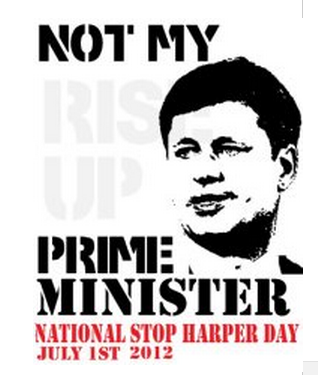 Traditionally, July 1st is a day known as "Canada Day" by Canadians across the country. This year however, that all changes, In most cities across Canada July 1st 2012 will now be known as National Stop Harper Day. One only needs to mention Steven Harper in public and his unpopularity with Canadians becomes very apparent. Harper's general dislike isn't without merit, in fact the list of reasons is too large to fit in a regular conversation and expands daily.

The "in and out" scandal, lying about voter suppression, the F-35 debacle, muzzling scientists, opposition to environmental groups, union breaking, the tar sands... the list goes on and on. Sadly, most Canadians are only now beginning to realize that this is just the tip of the iceberg for the "Harper Government", formally known as the Canadian government.

One of his largest recent human-rights offences is the attempted implementation of Bill C-10, the Omnibus crime bill. Currently, it is being criticized by the Supreme Court of Canada, as many of its components are considered cruel and unusual punishment.

With Harpers recent unwillingness to celebrate the 30th birthday of our Charter of Rights and Freedoms, his message becomes more apparent. What will be left of the Canada we used to know? We've become little more than the great black oil stain on the top of America.

So instead of celebrating Canada Day 2012, join Canadians as they take to the streets in an effort to take our Canada back! In Nelson BC they'll be highlighting the event with a day of mourning for our democracy. An old-time funeral procession for our once beloved country will make its way from downtown to the iconic Nelson bridge. In Grand Forks BC, the Canada Day Parade will now be the Stop Harper Day parade. Your help is needed, contact your local activist community!

Our voice is unified, our demands are clear. The people of Canada firstly demand fair elections, and a royal commission into the level of vote fraud in the previous election. Once the fraud is proven, we demand that all laws passed by the illegitimate Harper government be rescinded. Most of all we the Canadian people demand justice for the crimes committed by the current government, all those responsible. We demand they face the full extent of the law for their crimes.

As this event is held on a day of national pride, where Canadians will already be wearing red and waving Canadian flags, the Canadian peaceful revolution will be known as the Red Revolution. Let’s paint the country red, in the name of peace!