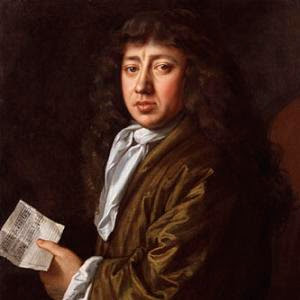 One of the oldest and most well-respected bloggers has brought his online journal to a close.

Since January of 2003 - 18 months before I began wmtc - I have been reading The Diary of Samuel Pepys online. Tomorrow night at about 9:00 UK time, the Diary will end. (The final entry is here.)

Samuel Pepys (pronounced "peeps") wrote a daily diary from January 1, 1660 to May 30, 1669. In it, he recorded a life both public and private - everything from the political machinations of the King and Parliament, to his theatre attendance and what books he was reading, to his new gadgets, clothes, and other luxury purchases, to - famously - his sexual exploits and related marital woes.

The Diary provides a rare, first-person view into the life of 17th Century London, including major events such as wars, the plague and the Great Fire of London. It's both a personal view of history, and a historical view of the person - truly a window into another world. It's also a fascinating lesson in how the English language has changed in 400-some-odd years.

Phil Gyford, who lives in London (UK), began posting The Diary of Samuel Pepys online in January 2003. He posted the diary in daily installments, each entry corresponding to its original date, 343 years earlier. A dedicated group of readers have annotated The Diary online, providing additional historical context, fleshing out a wide variety of topics, speculating on Sam's motives and meanings, and gossiping about his private life. And of course, many thousands of people have read the Diary online without annotating.

As the Diary dwindled into its last weeks, then days, many readers have been asking Phil if he would start the whole project again, from the beginning. I could scarcely believe the nerve - and the selfishness! Phil's answer is here. He's far too polite!

Even more frequent than the pleas to re-start the Diary have been the expressions of sadness that it's ending. Perhaps I'm just the only person to admit it, but I'm not sad - I'm relieved! I'm so happy to have read the whole thing from beginning to end, and now I'm glad to have one less thing to read.

Reading the Diary of Samuel Pepys in an online, collaborative environment has been a wonderful and enriching experience. It's one of the very best uses of the internet I know of, and it wouldn't have happened without Phil Gyford. Thank you, Phil! And thank you, Samuel Pepys!
Posted by laura k at 5/30/2012 02:00:00 PM