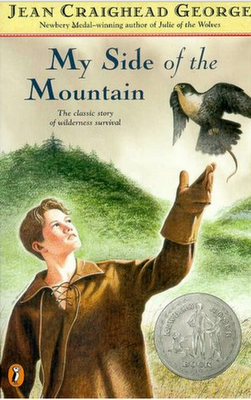 Jean Craighead George, author of some classics of children's literature, died a few days ago.

In one of those eerie coincidences that seem to happen so often, I was just talking about George. At the library, I noticed that one of my favourite childhood books, My Side of the Mountain, was written by author of Julie of the Wolves, a book I loved when I was slightly older. I wondered if I knew that as a child, or if my love of My Side of the Mountain pre-dated my interest in authors. (That seems unlikely, as I worshipped Laura Ingalls Wilder, and knew the names E. B. White and John Steinbeck as a very young reader.)

George wrote more than 100 books, and I'm sure I read several of them. But My Side of the Mountain and Julie of the Wolves remain in my heart to this day. Thank you, Jean! I'm glad you lived a full life.

This excerpt from the New York Times obituary captures some of what made George's writing so meaningful.

“My Side of the Mountain” tells the story of Sam Gribley, a youth who forsakes a life of quiet desperation in New York City to live on his own in the Catskills wilderness. There, he survives by virtue of the deep sympathy with nature that animates all of Ms. George’s protagonists, until the modern world closes in again.

The novel was made into a 1969 feature film of the same title, starring Teddy Eccles and Theodore Bikel.

“Julie of the Wolves,” which was also a finalist for the National Book Award, centers on a 13-year-old Eskimo girl, Miyax, or Julie as she is known in English. Fleeing an oppressive arranged marriage, she strikes out to live alone in the Alaskan wild. Her survival is aided by a family of wolves, with whom she learns to communicate via sound and gesture, much as Ms. George did during a trip to the Arctic to research the book.

Throughout her career, Ms. George was praised by reviewers for her lyric prose, vivid descriptions and meticulous research. (Until she was in her mid-80s, she routinely visited the wild locales about which she wrote.)

Jean Carolyn Craighead was born in Washington on July 2, 1919. Her father was an entomologist for the United States Forest Service, and the family often accompanied him on trips into the field. (Her brothers, John and Frank, grew up to become prominent naturalists who studied grizzly bears.)

It was not until she started school that young Jean realized that her first pet — an eminently reasonable presence in the Craighead home — was not strictly conventional.

“By the time I got to kindergarten,” Ms. George told The Journal News of Westchester in 2003, “I was surprised to find out I was the only kid with a turkey vulture.”

In 1944 she married John George, an ornithologist, and settled into a domestic routine that included writing, motherhood and wildlife management. Over time, as she recounted in her memoir for children, “The Tarantula in My Purse” (1996), the household grew to include 173 pets, not counting cats and dogs.

Among them were a crow that gathered coins and deposited them in the rainspout of the local bank and an owl that adored taking showers in the family tub. (Overnight guests at the George home were met with a cautionary sign: “Please remove owl after showering.”)

Also in residence, for a brief, nervous time, was a “darling beaver,” as Ms. George later recounted, adding, “We didn’t keep him long because he cut down the furniture.”

For all her honors, perhaps the greatest index of Ms. George’s appeal could be found in the mail she received from her readers. Again and again, she said, they homed in on the truly salient thing about the wilderness lives she so often portrayed.

As she told The New York Times in 2003, “Children will often write, ‘We love your books because there are no adults in them.’ ”