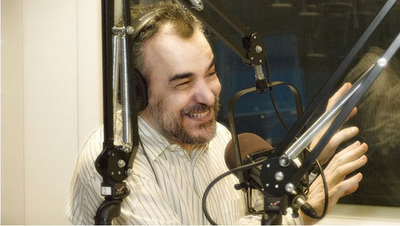 Pete Fornatale, a pioneer of rock radio, died this week at the too-young age of 66. I learned so much from Pete! Like many people, I especially loved his Sunday morning "Mixed Bag". From The New York Times:

Mr. Fornatale was at the forefront of the FM revolution, along with WNEW-FM colleagues like Scott Muni, Rosko, Vin Scelsa, Dennis Elsas, Jonathan Schwartz and Alison Steele (who called herself “the Nightbird”). They played long versions of songs, and sometimes entire albums, and talked to their audiences in a conversational tone very different from the hard-sell approach of their AM counterparts.

WNEW-FM may have been the most influential experimenter. When the station dropped rock music for talk radio in 1999, Billboard called it “a legend, affecting and inspiring people throughout the industry.”

Mr. Fornatale (pronounced forn-a-TELL) had actually beaten WNEW to the punch. As a sophomore at Fordham University in 1964, he persuaded the school’s Jesuit leaders to let him do a free-form rock show on what was officially an educational station. He continued that show for a few years after he graduated, and for a while could be heard on both WFUV and WNEW.

WOR-FM became the first commercial station in New York to adopt the format, in 1966, but abandoned it after about a year. WNEW, with the slogan “Where Rock Lives,” adopted it in 1967.

Mr. Fornatale came on board in 1969 and quickly moved to the center of New York’s music scene. He gave early exposure to country-rock bands like Buffalo Springfield and Poco. He did one of the first American interviews with Elton John, and got a rousing ovation when he brought a rented surfboard to Carnegie Hall for a Beach Boys show. He introduced Curtis Mayfield to Bob Dylan at a Muhammad Ali fight.

In 1982 he started “Mixed Bag,” a program that emphasized singer-songwriters, on Sunday mornings. His regular guests included Suzanne Vega, who introduced herself to him by sending a fan letter.

One of Mr. Fornatale’s signatures was playing songs that followed a theme. It might be colors, with a playlist including the Beatles’ “Yellow Submarine” and Joni Mitchell’s “Blue.” Or it might be great inventions, as when he celebrated the 214th anniversary of the United States Patent Office. Or the theme might simply be radio.

Allan was a college radio DJ when we met and during our long-distance relationship. When he was in New York, we'd listen to "Mixed Bag" on Sunday mornings. I always reminisced about how much I learned about music from that station - something that, even then, was becoming a distant memory.

When WNEW-FM was bought by a chain and became just another commercial, cookie-cutter, so-called classic rock station, Pete moved to WFUV, an excellent public radio station affiliated with Fordham University in the Bronx. I listened to college radio off and on, and I tried to get into the great WFMU, but the demise of WNEW-FM really killed my relationship with radio.

Thank [something] for the internet. Between the death of radio and the advent of the internet age, discovering music was much more difficult and time-consuming. In that heydey of rock radio and even beyond, Pete Fornatale was the brightest of lights. You can read a tribute to him at WFUV's website.
Posted by laura k at 4/29/2012 06:00:00 AM