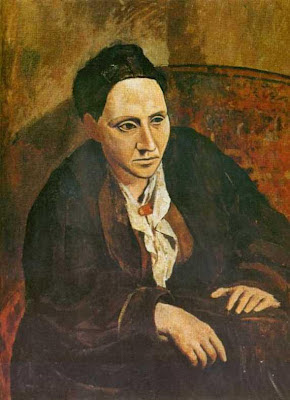 I've just returned from a lovely brief trip to New York City and points nearby. Apologies to friends who I didn't notify that I was coming in; I was in dire need of less running around and more downtime. I had excellent quality time with my mother and siblings, enjoyed a few really good meals, walked through Central Park and around the Upper West Side, had a gabfest with NN, and took in an exhibit by myself, my preferred mode of museuming. If you're in the New York area, I highly recommend "The Steins Collect: Matisse, Picasso, and the Parisian Avant Garde" at the Metropolitan Museum of Art. I hadn't been to the Met since moving to Canada, and it never disappoints. I highly recommend this exhibit. If you enjoyed Woody Allen's "Midnight In Paris," you'll especially want to see this.

I witnessed two little New York moments, one in a coffee shop and the other on the subway.

Sitting near me as I had a cup of tea in a coffee shop were two women. One was a senior, white, impeccably groomed in casual clothes, a smart short haircut, lovely jewelry. She was of a type seen all over New York, but especially on the Upper West Side. Not ostentatiously wealthy as you might see on the Upper East Side, but comfortable, and independent, a self-assured older New Yorker. The other woman was perhaps in her 40s, African-American, a working woman. If I saw them walking together, I would have thought the black woman was a personal care assistant - that's pretty typical. But the older woman was in good shape, not visibly in need of assistance, and their relationship did not seem in any way defined as employer and employee, or by any type of class or power lines in either direction. They were engrossed in conversation, at first complaining about the many annoyances of daily life in New York. There is no rush hour anymore! Every hour is rush hour. You have to leave an extra 30 minutes to get anywhere! Later, the topic drifted to shopping - where they like to shop, what they like to spend money on. Both feel they should shop less, but agree that buying nice things for themselves cheers them up. After that, they traded stories about some people they know. He's very eccentric. The whole apartment is filled with books! Floor to ceiling, huge stacks of books!

The African-American woman asked, "Are you ready to go?", and the older woman began gathering her things, putting on her scarf and jacket. That was my only clue that perhaps the younger woman was hired by the older one. They each had packages from nice stores throughout the neighbourhood. Perhaps an afternoon of shopping is too much for the older woman to manage by herself, so an assistant helps her. Or perhaps they are simply friends from the neighbourhood.

Later, on the subway, a man in maybe his early or mid-30s got on the subway wheeling an instrument case. I saw a woman seated two people from the door look at him and smile to herself. At first I thought she was just admiring the scenery, but then I noticed she also had an instrument, strapped to a similar wheelie cart in front of her. She caught his eye and said, "Are you coming from a gig?" He said, "On my way to one." She asked him what venue he was playing, and with what band. He mentioned that the man who assembled his gig is a tennis pro who also plays for fun. They both said, "Like Woody Allen."

The musicians chatted until the man's stop came up. They said, "Have a good gig - enjoy" and off he went. She caught me looking at her and we shared a quick smile. I knew just how she felt: making a momentary connection with a stranger on the subway is so uplifting. It can keep you feeling good about your city the whole day.

Also on the subway, I saw ads for a service I would have loved when I lived in the City: Wag.com, a pet-supply delivery service. New Yorkers love to have things delivered. Indeed, they need to have things delivered. Most people own cars, and those that do use them mainly for trips out of town. Shopping for anything more than a few items can be amazingly inconvenient, and schlepping bags of dog food on the subway or with car services is not fun. Wag.com joins Diapers.com, Soap.com, and my old favourite, Fresh Direct as ways New Yorkers cope. I liked the ads: "You Sit. We Fetch." and "Feed the cat with a click of the mouse."

This was the first time I've flown Porter Airlines, but I will use them from now on if possible.

I hadn't tried them sooner because I mistakenly believed it would be difficult to get from Newark Airport to my mom's house by public transit. It was actually super easy.

The best thing about Porter is the Toronto City Centre Airport. It's so civilized. First of all, it's quiet: no TV blaring, no piped-in music. This is very smart. Everyone has their own entertainment, and those who don't, don't want any. There's a bar area where you can make a cup of tea, coffee, espresso or cappuccino, or take a bottle of water or a can of soda, along with cookies - for free. In the waiting area, chairs in groups of four are arranged around a table, and with low partitions between the groups.

And unlike Air Canada and many other airlines, you're not charged extra for every little thing. I've flown Air Canada several times, and I haven't had the problems many people talk about, but Porter was a much nicer experience.
Posted by laura k at 4/26/2012 06:00:00 PM