I am absolutely gaga over Roku. This was exactly the missing piece we needed. And it all started with getting rid of Rogers cable.

In February, I asked for help with my movie-season problem. We had been getting special treatment from Zip, but once that ended, Zip became useless again. I knew there had to be a better way. It's the 21st Century, for crissakes. Why can't we get on-demand baseball, movies, and whatever else we want to watch? First world problems? Absolutely! But that's where I live.

In the past, no suggestions really worked for us. We couldn't get rid of cable TV, because we needed it to watch baseball. We couldn't watch baseball online, because we had a cap on our bandwidth usage. (And because of our work schedules, we had to subscribe to baseball through cable and internet!) I didn't want to watch movies via Netflix only on computer. I didn't want to buy a gaming system just to watch movies. Nothing was quite right.

And then, everything came together.

M@ started it all by identifying the root of the problem: the first step was to get rid of Rogers and their ridiculous bandwidth cap. Switching to TekSavvy was fast and easy. We save money, we get more, and suddenly... we have choices.

Next, we bought two Roku devices, one for each TV. Allan drove to Buffalo to make sure we were set up for the baseball season, but they may now be shipping to Canada.

And next, Netflix Canada has hugely improved since I first checked it out. It has even improved in the last two weeks, growing by leaps and bounds.

I thought that getting rid of cable would be slightly inconvenient, but I'd adjust. That's because I didn't know what awaited me through streaming, via Roku.

Baseball without commercials! (At least the ones between innings.)

Movies! And lots of them. No more waiting to see what we receive in the mail - but without having to watch on a computer, or having to hook up a computer to the TV.

And not just movies. The small amount of TV I care about is suddenly now available on demand. Without commercials.

And to complete the picture, if someone wanted to get around Canadian copyright restrictions - speaking hypothetically, of course - that someone could set up a VPN to access Amazon Instant Video. And then that purely hypothetical someone would have access to a full range of media, all streaming through the little marvel that is Roku.

If you haven't seen one yet, Roku is a little black box - 3.3-inches square and just under an inch tall - that plugs into your TV. Configuring it takes five minutes, max. You can't even really call it configuring; it just picks up your wireless, and you're ready to go. In keeping with Roku's keep-it-simple approach, even the remote is minimalist. 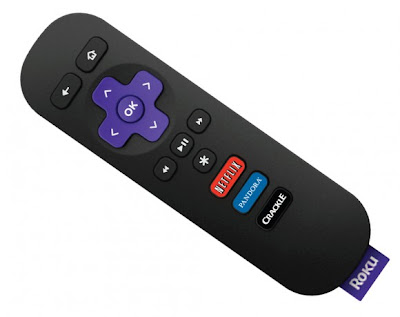 You choose what apps to load, some free and some for purchase. It supports MLB, NHL, NBA, and MLS games, Netflix, Hulu Plus, Crackle, Amazon Instant Video, and a bunch of other options.

From the earliest days of Netflix DVDs-by-mail and cable Pay-Per-View, I used to wonder when we'd be able to watch any movie or any TV show, anytime we wanted, in our own homes. I just moved one giant step closer to that.