"the greatest problem is we are afraid to offend our oppressors": john carlos, tommie smith, and a lesson about resistance 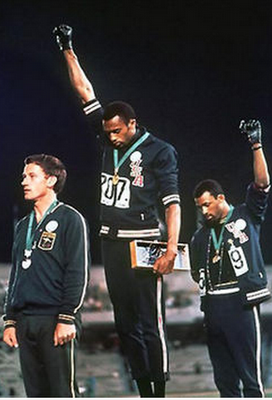 This is one of the most iconic photos in sports history: the Olympics, 1968, Mexico City. As the Star Spangled Banner begins to play, gold-medal winner Tommie Smith and bronze-medal winner John Carlos, each wearing a single black glove, raise their fists in a black-power salute. Peter Norman, the silver medal winner from Australia, wears a badge in support of their gesture.

This moment of silent protest rocked the world. The social revolution - often referred to as the "turmoil" - of 1968 broke through the sanitized, apolitical facade, forcing the public to notice and react. From The Guardian:

Anticipating some kind of protest was afoot, the International Olympic Committee (IOC) had sent Jesse Owens to talk them out of it. (Owens's four gold medals at the 1936 Olympics in Berlin themselves held great symbolic significance, given Hitler's belief in Aryan supremacy.) Carlos's mind was made up. When he and Smith struck their pose, Carlos feared the worst. Look at the picture and you'll see that while Smith's arm is raised long and erect, Carlos has his slightly bent at the elbow. "I wanted to make sure, in case someone rushed us, I could throw down a hammer punch," he writes. "We had just received so many threats leading up to that point, I refused to be defenceless at that moment of truth."

It was also a moment of silence. "You could have heard a frog piss on cotton. There's something awful about hearing 50,000 people go silent, like being in the eye of a hurricane."

And then came the storm. First boos. Then insults and worse. People throwing things and screaming racist abuse. "Niggers need to go back to Africa!" and, "I can't believe this is how you niggers treat us after we let you run in our games."

"The fire was all around me," Carlos recalls. The IOC president ordered Smith and Carlos to be suspended from the US team and the Olympic village. Time magazine showed the Olympic logo with the words Angrier, Nastier, Uglier, instead of Faster, Higher, Stronger. The LA Times accused them of engaging in a "Nazi-like salute".

This is yet another example of courageous resistance being vilified in the media and by the public, only to later shine in memory. One day Martin Luther King is on the FBI's Enemies of the State list, the next day politicians are shoving each other out of the way to say they loved him all along. Malcolm X's face is on a postage stamp. Never be afraid to be hated.

The terrific piece in The Guardian, with excerpts from the book The John Carlos Story, puts the protest in perspective, and puts you in John Carlos' mind as the moment approached.

The first thing I thought was the shackles have been broken," Carlos says, casting his mind back to how he felt in that moment. "And they won't ever be able to put shackles on John Carlos again. Because what had been done couldn't be taken back. Materially, some of us in the incarceration system are still literally in shackles. The greatest problem is we are afraid to offend our oppressors.

"I had a moral obligation to step up. Morality was a far greater force than the rules and regulations they had. God told the angels that day, 'Take a step back – I'm gonna have to do this myself.'"

The image certainly captures that sense of momentary rebellion. But what it cannot do is evoke the human sense of emotional turmoil and individual resolve that made it possible, or the collective, global gasp in response to its audacity. In his book, The John Carlos Story, in the seconds between mounting the podium and the anthem playing, Carlos writes that his mind raced from the personal to the political and back again. Among other things, he reflected on his father's pained explanation for why he couldn't become an Olympic swimmer, the segregation and consequent impoverishment of Harlem, the exhortations of Martin Luther King and Malcolm X to "be true to yourself even when it hurts", and his family. The final thought before the band started playing was, "Damn, when this thing is done, it can't be taken back.

There's a lesson many of my fellow Canadians need to hear: we cannot be afraid to offend our oppressors. I mean no disrespect to these courageous men when I post this more recent, modest echo of that day. The John Carlos Story: The Sports Moment that Changed the World is co-authored by the one and only Dave Zirin. Thanks to M@ for posting the Guardian story on G+.
Posted by laura k at 4/08/2012 05:00:00 AM