Cheers for Bashir Mohamed! He interrupted a speech by Jason Kenney, trying to ask questions about refugee health care, was removed and arrested, and now he's challenging the illustrious Minister to a debate. Video here.

An Edmonton teenager was arrested Saturday after grilling federal Immigration Minister Jason Kenney during his speech at a Conservative party barbecue.

Bashir Mohamed, 17, said he bought tickets to legally attend the barbecue, which was held inside a hanger at the Alberta Aviation Museum for more than 400 Tories.

Mohamed and two friends with video cameras arrived with a plan to question Kenney about the recent government cuts to health-care coverage for refugees arriving in Canada.

The policy, announced in April and in effect as of Canada Day, prevents refugees from accessing prescription drug, dental and other extended health-care coverage unless they're covered by a federal program.

The cuts were made to extended coverage that most Canadians pay for or already have covered by insurance. The government expects the policy to save $100 million over the next five years.

"This has been in effect since Canada Day and right now a refugee cannot receive certain health care," Mohamed said. "The reason I chose this course of action is because the minister doesn't allow question and answer debates." 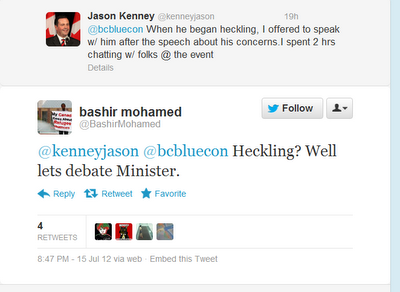