It didn't work with environmental activism either. After Natural Resources Minister Joe Oliver labelled opposition to the tarsands "radical groups" stacked with "jet-setting" celebrities, funded by "foreign special interest groups" who were trying to "hijack" the Canadian economy, thousands of Canadians joined the David Suzuki Foundation. Well-known and decidedly mainstream Canadians were moved to take a stand, including, most notably, Mike Holmes. Did you ever hear of a radical jet-setter having his own show on a home and garden channel? Me neither.

On the health care front, the Government's recent concession - restoring health care for one very limited group of refugees - is proof that the public outcry is working. But we have a long way to go. Please follow the example of the Canadian Medical Association, Canadian Dental Association, College of Family Physicians of Canada, Royal College of Physicians and Surgeons of Canada, Canadian Nurses Associations, Association of Canadian Social Workers, and the Canadian Association of Optometrists: contact Stephen Harper, Jason Kenney, and Minister of Health Leona Aglukkaq. Demand they restore the Interim Federal Health Program in its entirety. And if you haven't mailed your 59 cents yet, that's a good place to start.

But first, read this letter. [Please pardon the breaks; those were for posting purposes only. Click on any section to embiggen.] 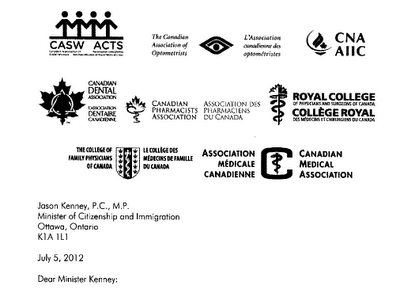 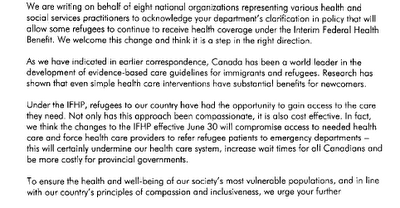 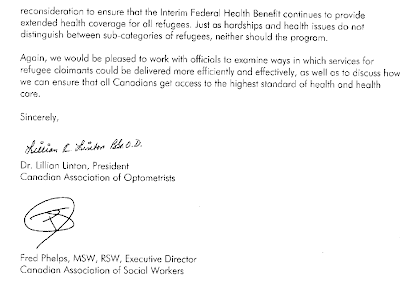 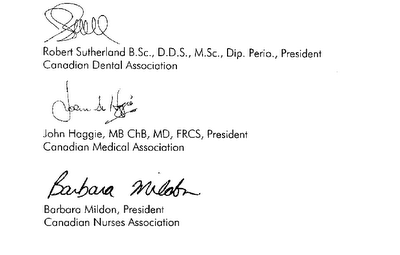 Government backs down on IFHP cuts for one refugee group only

Doctors will not compromise on health coverage for all refugees

Such a reversal indicates that the government acknowledges the need for access to medications, prosthetics, emergency dental and vision services and other essential health services for refugees. The federal government has finally agreed with health care workers, as a matter of equity, that refugees deserve the same health coverage as other low income Canadians—no more, no less.

Despite this reversal, many other refugees will still be denied access to basic health services.

Dr. Philip Berger of St. Michael’s Hospital in Toronto stated, “Most concerning is that refugees who come from what the government deems to be ‘safe countries’, will be denied the most basic health coverage. These refugees will be denied care for serious conditions such as heart attacks, other medical emergencies and all chronic diseases. Pregnant refugee women and their babies will be denied care. The government needs to rescind the Interim Federal Health Program changes so that all refugees have access to basic health care.”

Dr. Megan Williams, from Somerset Community West Community Health Centre in Ottawa, said, “The vast majority of refugees who are sponsored by church groups and other citizens will lose access to life saving medications. Many of these refugees come from refugee camps and have endured war and other forms of violence. Imposing these cuts is inhumane for refugees and unfair to the church groups and other citizens who have sponsored these refugees in good faith.”

Dr. Meb Rashid of Women’s College Hospital in Toronto said, “The physician advocacy campaign against these cuts will continue until the government rescinds the cuts for all refugees. Over a dozen national organizations, representing a breath of health care workers, have condemned these cuts. Health care workers have organized across the country and have developed a surveillance system to document the effects of these cuts. We will publicize these cases so that the government, media, and other Canadians know the consequences of the government’s policy.”

The government’s concession for Government Assisted Refugees is too little and too late. Many other refugees will suffer because of the cuts that are still in place. Doctors and other health care workers expect that the government will rescind its plan to cut health care coverage for all refugees.