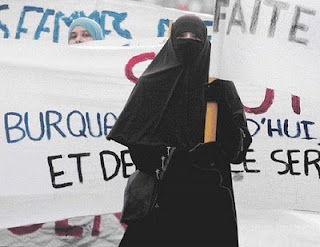 The Montreal Gazette calls the debate over whether Quebecers and Canadians should tolerate a woman wearing a niqab "the new flashpoint".

As a devout Muslim who wore a hijab, or head scarf, Miriam Abushaban was used to having strangers tell her: "Go back to your own country!"

But when she started wearing a face-covering niqab a year ago, the insulting remarks escalated into aggressive confrontations.

"One person said I look like I'm going to slit someone's throat," says the 22-year-old Concordia University student who comes from New Jersey, where she was raised in a Muslim home by a Palestinian-American father and a Hispanic-American mother who converted to Islam when Miriam was two.

Another time, a woman cursed and shoved her, accusing her of being an "underdeveloped monkey."

Men and women alike have accused her of promoting oppression.

"French Québécois women come up to me and say, 'We really worked hard to get our women's rights and now you're going to take them away from us,' " says Abushaban, a third-year student in early-childhood education.

Of course that attitude doesn't stop at the Québec border. The usually-sensible Heather Mallick says, "Women in niqabs look like scary black crows as they flutter along a Canadian sidewalk." She fights urges to "hustle over to women in niqabs and whisper, 'You don't have to wear that here.'"

What revolting condescension - what myopic assumptions. Our own choices - forged by family, culture, worldview, personality - are not universal. Mallick's secret niqab-busting urge reminds me of people who assume I was unable to have children, or that all single women are lonely spinsters. Chances are high that the niqab-wearing woman knows she doesn't have to wear her veil in Canada. But she didn't think she had to give up her freedom of religion to live here!

Recently a friend told me about a convention she attended in Egypt, where many of the participants wore niqabs. Some were university students, some published authors, engineers, scientists. This doesn't exactly square with Mallick's evocation of Handmaid's Tale and self-injury with scissors.

France, where the hijab is banned in schools, is considering making publicly wearing a niqab illegal. The full-face headscarf is already illegal in Belgium. Switzerland has banned the building of new minarets; the Netherlands may follow. And all over Europe, Muslims are being harassed, threatened and attacked on the streets, in their schools and workplaces. It's not a coincidence.

Has Europe forgotten its own history? Where does intolerance of religion lead?

Does Quebec want to go there?

I understand requiring the face to be exposed for a driver's license or to vote. But for French class? The "pedagogical objectives" of French immersion is a pretty lame excuse for violating freedom of religion.

Quebec Immigration Minister Yolande James says "the majority supports these values" and the media can always find Muslims that agree.

Is an individual's religious choice to be subject to majority approval? Shall we convene a panel to vote - thumbs-up, thumbs-down - on what our neighbours' place in their trays in the spiritual cafeteria?

To the oft-mentioned excuse about French culture being eroded by such religious displays, I ask, is your culture so fragile that it cannot withstand a woman covering her face?